Cambridge is one of the most bike-friendly cities in the world because of the Cycling Safety Ordinance. This ordinance, created by our advocacy partner, Cambridge Bike Safety, requires 2-4 miles of separated bicycle lanes to be built every year on Cambridge streets with quick build materials. The network is set to be finished by 2026, but certain streets have stricter deadlines, like Porter Square. 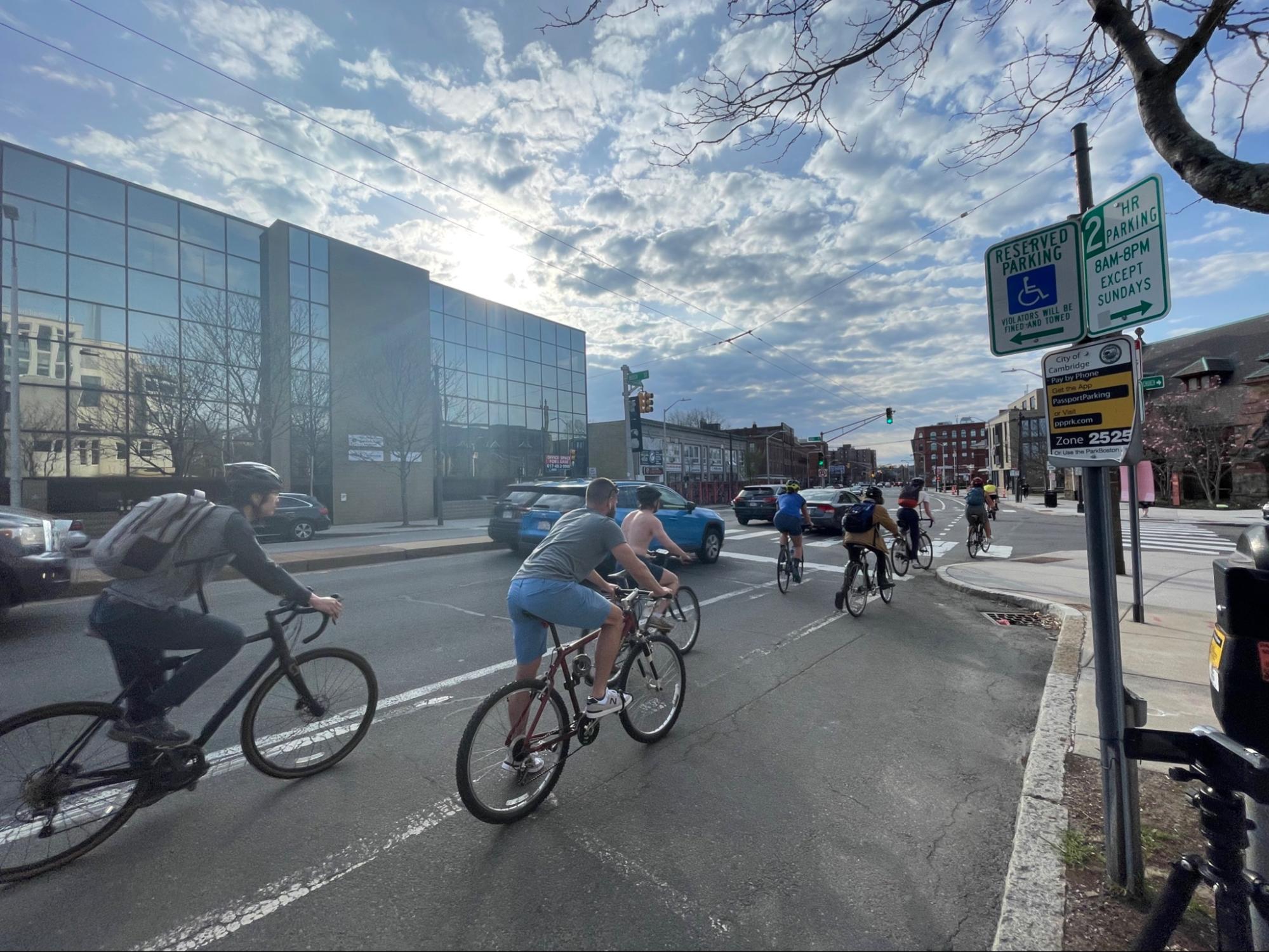 The bike lanes that currently exist along Massachusetts avenue discourage inexperienced riders from biking on Massachusetts Avenue. They leave people on bikes between parked cars and the busy travel lane with buses and trucks. This area has a history of vehicle-bicycle conflicts, one in 2016 sadly resulted in a fatality. It is crucial that the bicycle lanes in Porter Square become separated.

Separated bike lanes reduce the risk of dooring, eliminate the risk that vehicles can block the bike lane, prevent bicyclists from being passed too close, and invite riders of all ages and abilities to cycle. Above, is the design plan for these separated bike lanes. The project will improve separation where Joe Lavins was killed, as well as adding new accessible parking spots, side street metered parking, and a new floating loading zone.

Unfortunately, some business owners along Massachusetts Avenue have opposed this project, despite the dangers present in Porter Square, citing the loss of 35 on-street metered parking spots. However, the project will also be adding off-street parking and more loading zones. In fact, the number of accessible parking spots will increase with this project.

Sadly this opposition is now threatening the very existence of the cycling safety ordinance. Councilor Toner, Simmons, and Carlone, have all submitted a policy order that would delay all Massachusetts Avenue quick build bike lane projects like this one, until 2026, keeping this corridor as dangerous as it was when Joe Lavins was fatally struck 10 years ago.

If you care about safe bicycling infrastructure in Cambridge, it is crucial that you send a letter to Cambridge City Councilors, asking them to oppose this policy order, so that critical separated bicycle lane infrastructure can continue to be built. They may be delaying Porter Square now, but if this passes, it will set a precedent for future delays that will ultimately kill the cycling safety ordinance, changing Cambridge from a world-class bicycle city, to a typical car-centric community.

Email Cambridge City Council to ask them to vote against policy orders 3 and 6.

Join the public meeting on Monday, April 25th at 5:30pm

This action alert was created in partnership with Cambridge Bike Safety. Learn more about their advocacy at www.cambridgebikesafety.org.