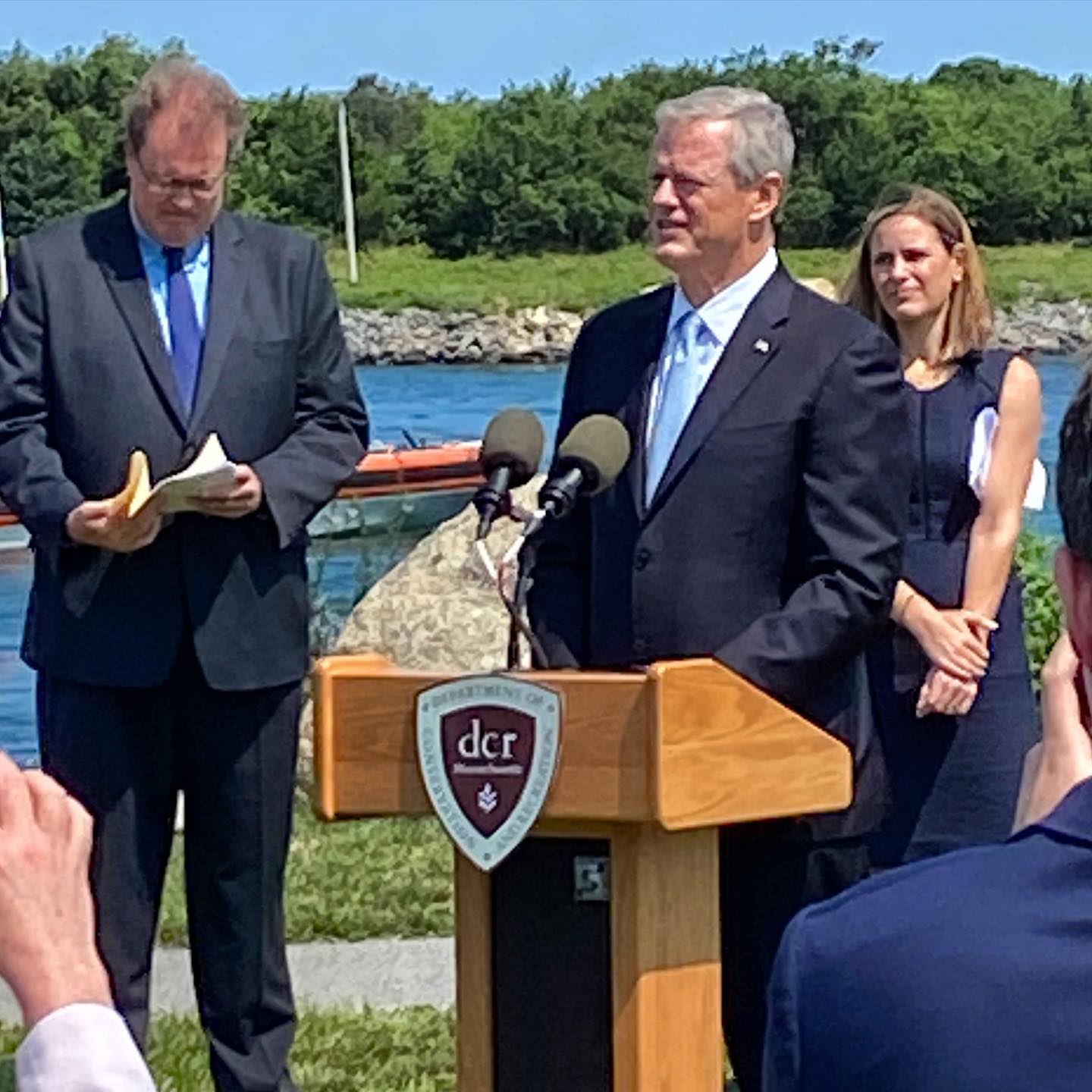 Governor Baker recently visited the Cape Cod Canal to announce $4 million in MassTrails grants for communities across the commonwealth. This latest round of investment in our trails network will help increase connectivity and help push forward our growing statewide network of shared-use pathways.

The MassTrails grants awarded to the City of Westfield and the Town of Southampton will move forward the final pieces of the New Haven & Northampton Canal Greenway, an 81-mile multi-use pathway that connects Connecticut and Massachusetts. The City of Westfield received $61,500 towards a feasibility study for the northern terminus of the Columbia Greenway. While the Town of Southampton secured $100k for the purchase of 3.5 miles of inactive railroad corridor to begin filling in the "missing middle" portion of the trail between Easthampton and Westfield. The ability to use Community Preservation Act (CPA) funding for federally rail-banked trail acquisition, which was recently included in the budget passed by Governor Baker, is a huge win for Southampton who can now use both CPA funds and their MassTrails grant to secure the purchase of the rail corridor for their trail.

Crucial links of the Mass Central Rail Trail (MCRT), a 104-mile trail connecting Northampton to Boston, received funding thanks to MassTrails grants awarded to the East Quabbin Land Trust and the Town of Belchertown. The East Quabbin Land Trust received $200k for the construction of the MCRT trail section through Ware and Hardwick. The Town of Belchertown’s $33,066 grant will help fund the design of Phase II of their Belchertown Greenway-MCRT segment.

On the Cape, the town of Sandwich received a $155k to fund the project development of an important connection from Route 130 to the Cape Cod Canal path. This connection would improve the trail connectivity along the Cape, making it easier for residents and visitors alike to take advantage of the beautiful trail network.

Out in the Berkshires, Pittsfield received $133,600 for the design of a southern extension of the Ashuwillticook Rail Trail and North Adams received $240k towards the development of the North Adams Adventure Trail which would connect the northern section of the Ashuwillticook to the Williamstown Bike Path. Advocates in the Berkshires have been working on a connected pathway from Connecticut to Vermont for over 20 years; these two trail sections will help bring them closer to their goal of a safe cycling route through the Berkshires.

These projects are just a small sampling of the trails that received funding from the latest MassTrails grant round. You can check out the entire list of awardees on the MassTrails Grants site and learn more about the program. This investment in our trails network is a big win and the MassTrails team has been working hard to help assist the growth of trails across Massachusetts. Their recent Mass Central Rail Trail Feasibility Study and Shared Use Paths Impact Study have provided advocates across the state with the data needed to help fill in network gaps and fight for more trails.