Bay State Bike Month has arrived and the MassBike team kicked off the month with the Buzzards Bay Coalition & the South Coast Bikeway Alliance in New Bedford. We had an incredibly clear and sunny day to experience the gorgeous New Bedford views by Fort Taber and along the hurricane barrier.

Mayor Coogan and his wife, Judi St.Hilaire, joined to kick off our bike ride. We appreciate their support and all their bike-friendly work in Fall River. Jen Carloni, Director of City Planning for New Bedford, joined the ride as we enjoyed some of the infrastructure she helped bring to life. Riders mingled before the start of the event, with groups of cyclists showing up from Dartmouth and Fairhaven thanks to organized rides by the South Coast Bikeway Alliance.

Civitron of the New Bedford Starchasers led the ride and about 70 bicyclists made our way from Cisco Brewers down to Fort Taber. Riders enjoyed scenic ocean views for the entirety of the ride and the day was clear enough to spot the islands across Buzzards Bay. We enjoyed riding atop the hurricane barrier along Clark’s Cove before taking to the street and making our way back towards Cisco. Our ride ended with a windy final stretch of the New Bedford Harborwalk atop another section of the hurricane barrier. 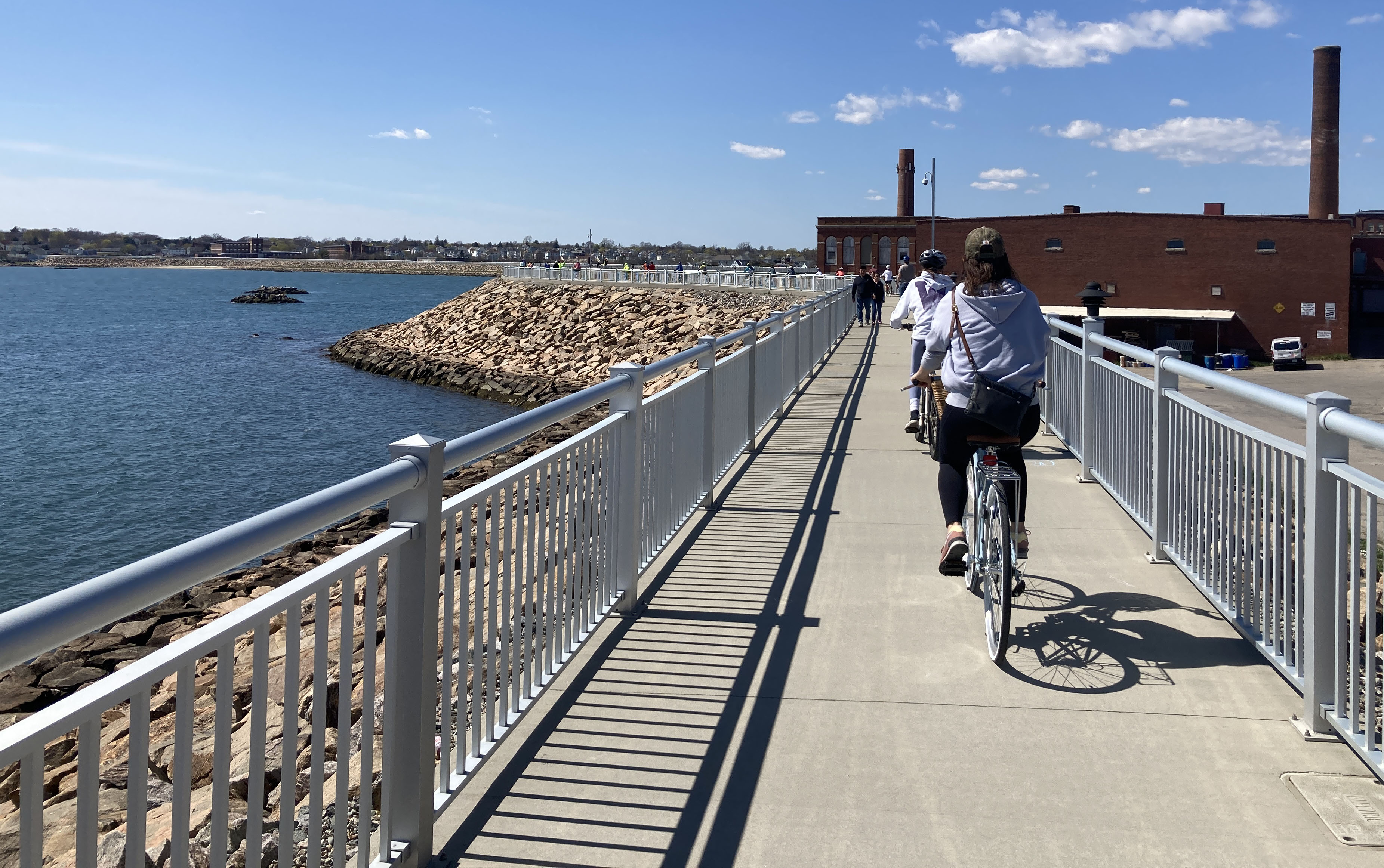 We had a packed after-party at Cisco Brewers. The bicycle pathway along the front of Cisco and the publicly accessible boardwalk along the water's edge, allow for bicycles and pedestrians to access Cisco and connect to the walkway on the hurricane barrier. Jen Carloni, Director of City Planning for New Bedford notes, “Multimodal networks take the investment and commitment of both the public and private sector. Cisco New Bedford is an incredible example of private investment in multimodal infrastructure.”

View of Cisco Brewers outdoors venue, the public walkway can be seen along the water

New Bedford is currently working on their Blue Lane, the city’s cohesive designation for a series of recreational pathways along the waterfront. The network connects New Bedford's 26 acres of beaches, 12 miles of trails and bikeways, and 30 parks. The public boardwalk behind Cisco is part of the Blue Lane, which will not only connects to attractions such as the New Bedford Whaling Museum but to their inter-city rail station currently in construction downtown. It was great to experience a portion of the Blue Lane firsthand during our Bike Month Kick-Off event and we appreciate New Bedford’s efforts to support bicyclists & pedestrians.

If you missed the kick-off event & want to experience the beautiful views that come with riding on the South Coast, the South Coast Bikeway Alliance is hosting their Fort to Fort Ride on May 21st and for an autumnal experience, the Buzzards Bay Coalition’s Watershed Ride is being held October 2nd.

Find a Bike-Friendly event near you this May on the Bay State Bike Month Calendar or join one of our virtual Bike Month Challenges for your chance to win prizes.