An Act to Reduce Traffic Fatalities is Signed Into Law! 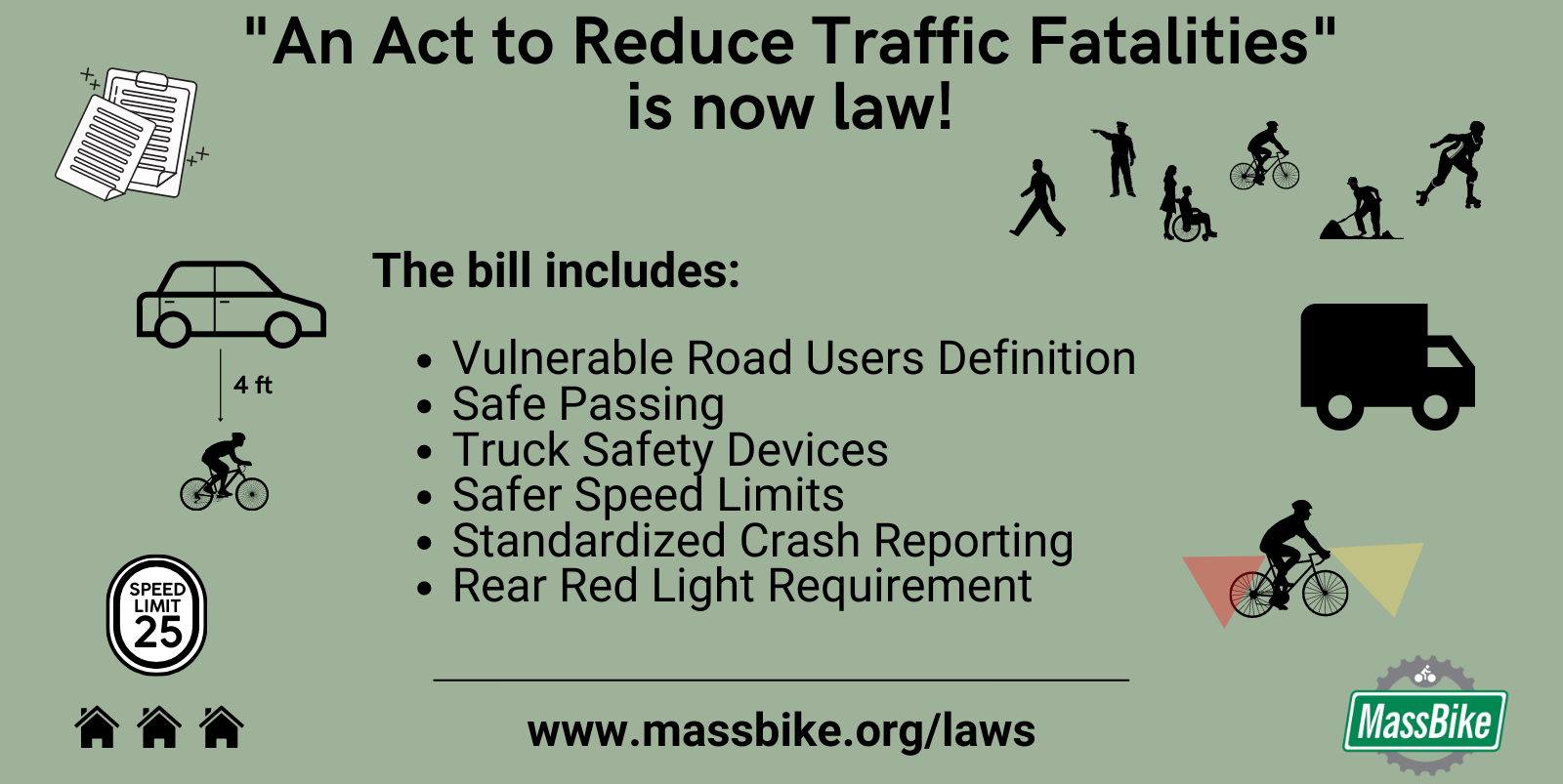 Thanks to your support, Governor Baker signed An Act to Reduce Traffic Fatalities into law! This critical traffic safety bill has a variety of components that will make our roadways safer for everyone across the commonwealth. Read the final text signed by Governor Baker here.

For the past 10 years, MassBike has been advocating for "An Act to Reduce Traffic Fatalities." We’ve worked closely with the Vision Zero Coalition on this important legislation to help end fatal crashes on our streets. This bill will support not only the safety of people walking and biking, but also the safety of people in wheelchairs, construction workers on their job sites, tow truck drivers and first responders stopped on the side of the road, and anyone out on our public ways without the protection of steel, seatbelts, and airbags.

We want to thank the champions of this bill and bike-friendly leaders on Beacon Hill and in Governor Baker’s Administration, Representative Mike Moran, Representative William Straus, and Senator William Brownsberger for supporting an Act to Reduce Traffic Fatalities. Their leadership has brought us one step closer to eliminating fatal crashes on the roads throughout Massachusetts.

“This safety bill reflects the years of effort from bike advocates working together with so many of my colleagues in the Legislature,” Representative Michael J. Moran (D-Boston), Assistant Majority Leader and lead sponsor of the bill. “This bill will save lives and help eliminate tragic and preventable deaths on our roads. Thank you to the many groups led by MassBike who worked tirelessly on this issue and to the Speaker and my House colleagues who voted for the bill.”

“With more of our residents utilizing cleaner forms of mobility such as traditional and electric bicycles, these bills make necessary changes to better protect all users of our public ways,” said Representative William M. Straus (D-Mattapoisett), House Chair of the Joint Committee on Transportation.

We are grateful for all our members and advocacy coalition partners who helped elevate these concerns to local legislators and helped these priorities get over the finish line.

Here are some of the key components of the bill and why they are important:

Requires state-contracted trucks to be equipped with safety side-guards, mirrors, and backup cameras to reduce fatalities of people walking and biking. This requirement will reduce some of the tragic right-hook fatalities that we’ve seen in recent years.

Clarifies the process for municipalities to alter speed limits in thickly settled areas from 30 mph to 25 mph both on state-controlled roads and on the roads they control. This is an update on the previously implemented Chapter 90, Section 18. Slower speeds save lives and this change will align with MassDOT's new safe speeds philosophy.

As we well know, reporting data is critical to understanding dangers on our roadways. For far too long we have been dealing with a lack of standardization when it comes to bicycling and pedestrian crash data. Standardized crash reporting will allow us to systematically measure, report, and track crashes which allow us to make data-informed changes that increase roadway safety.

To ensure cyclists are visible on our roadways, the legislation adds a new requirement for use of rear red lights at night. This means, that when riding at night bicyclists should have both a front and rear light. It should be noted that police officers will not abe able to stop a cyclist for a light violation.

We understand that the purchase of lights can be a barrier for riders. To support compliance with this new requirement, MassBike will be redoubling our Lights Brigade Program efforts to distribute free bike lights through the commonwealth. To ensure the success of the program, we need advocates like yourself to volunteer to host distribution events.

The passing of An Act to Reduce Traffic Fatalities is a tremendous step forward toward Vision Zero and ending needless fatalities on our roadways. MassBike has been pursuing this omnibus roadway safety bill for 10 years and we couldn’t have done it without you. While this is a big step toward Vision Zero, we have a long way to go until we find ourselves where everyone can cycle home safely. We hope you donate to MassBike today to support our life-saving work.