I’ve been thinking a lot about a recent public statement posted on the City of Springfield’s official Facebook feed, in reference to groups of youths on dirt bikes and bicycles riding illegally on the streets. The City uses phrases like "miscreant" and "negative individuals" to describe the riders, instead of calling the riders what they are, which are kids riding bikes. This is followed by the Police Commissioner freely using words like "aggressive plan of attack" to "crackdown" and "eradicate this issue." 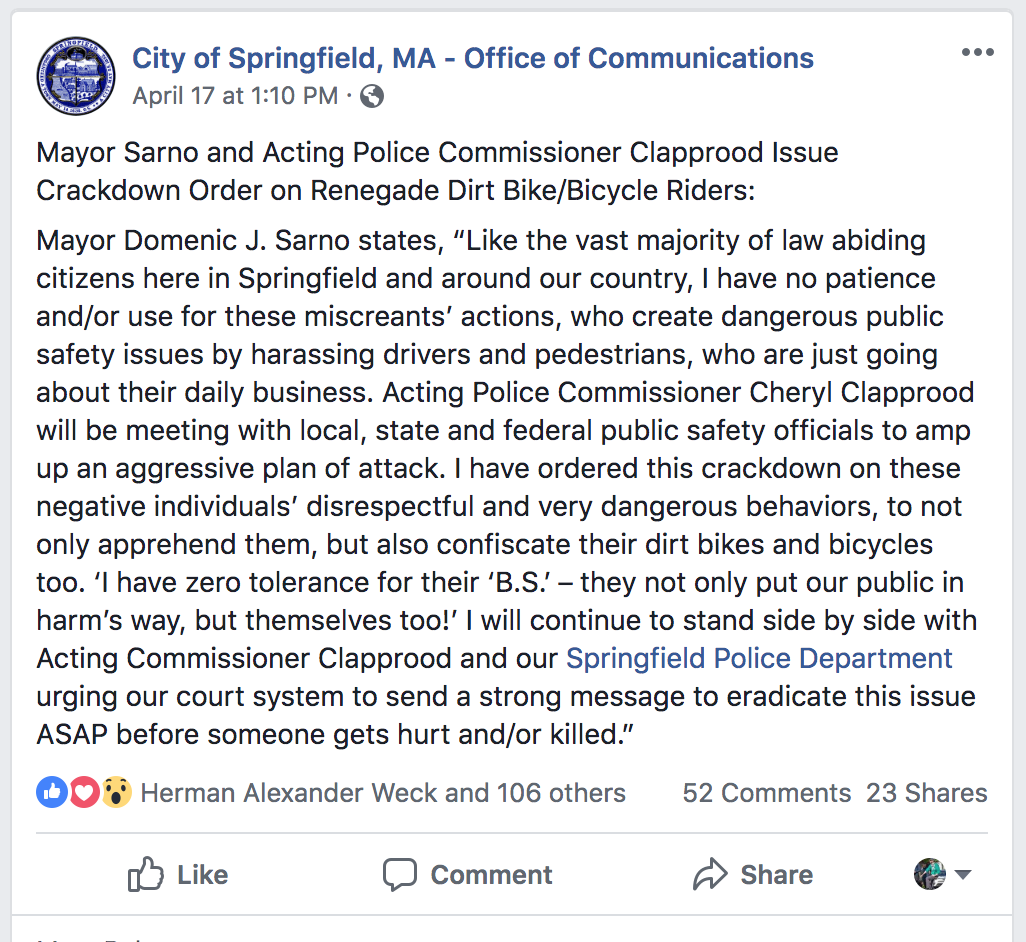 In response, those riding bikes in Springfield feel they have to defend themselves, as noted in this Western Mass News report: "19-year-old Stephan Heathman-Guidry loves riding his bike, but, in recent weeks, many drivers have become angry with bicyclists in the city, because of the way many weave in and out of traffic. 'That's not all of us,' Stephen tells us. 'You can't get mad at us and call us the same, because you're just grouping us in. A lot of us are good kids. We just want to ride and have fun.’" 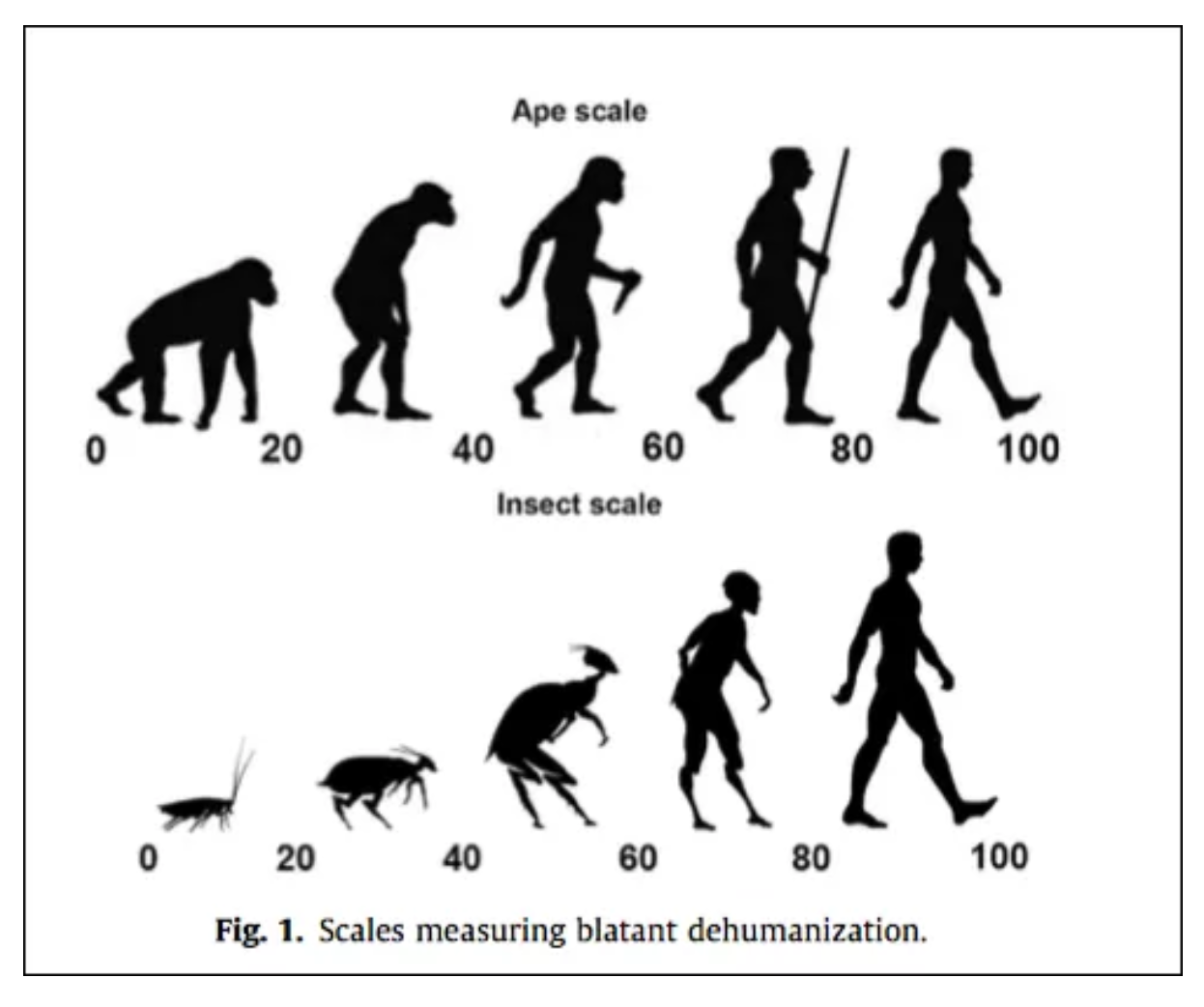 The way this conflict is framed is reminiscent of an article in Streetsblog USA describing how aggressive drivers in Australia see cyclists as less-than-human on the roads. The research explains how, by removing the humanity from bicycle riders, people driving cars are enabled to purposefully engage in dangerous behavior without compromising their moral code. Turning back to Western MA, it seems Springfield is viewing their urban riders not as people, but as "miscreants," going so far as calling to "eradicate" them.

But the point that sticks with me is how people who bike are commonly grouped together, and thus can be collectively "otherized" so one bad action by an errant rider puts all bikers in a negative light. It’s the "one bad apple" phenomena, where a person on a bike speeds through a red light and the drivers stopped at the intersection decide to paint all bikers as lawless renegades. Or, as less-human.

Of course, "otherization" touches on much deeper societal issues which affect people of color, women, LGBTQ+ communities, immigrants, ethnic and religious minorities, frankly far too many people in our society. And, to be clear, I’m not trying to equate the dehumanization and otherization of people riding bikes with any other identities or communities. I am trying to say that we need to rethink how we both subconsciously and actually refer to each other as "people."

By putting the person-hood into perspective, one then gets an understanding of why people act as they do, to go deeper than just being a "miscreant." Springfield officials should be asking why their citizens would wheelie into oncoming traffic. This would then lead them to tackle the roots of the issue, to actually help solve the problem by treating it with the compassion that comes with humanity. For example - build a place for the kids to ride legally, like a rad pump-track in Springfield! 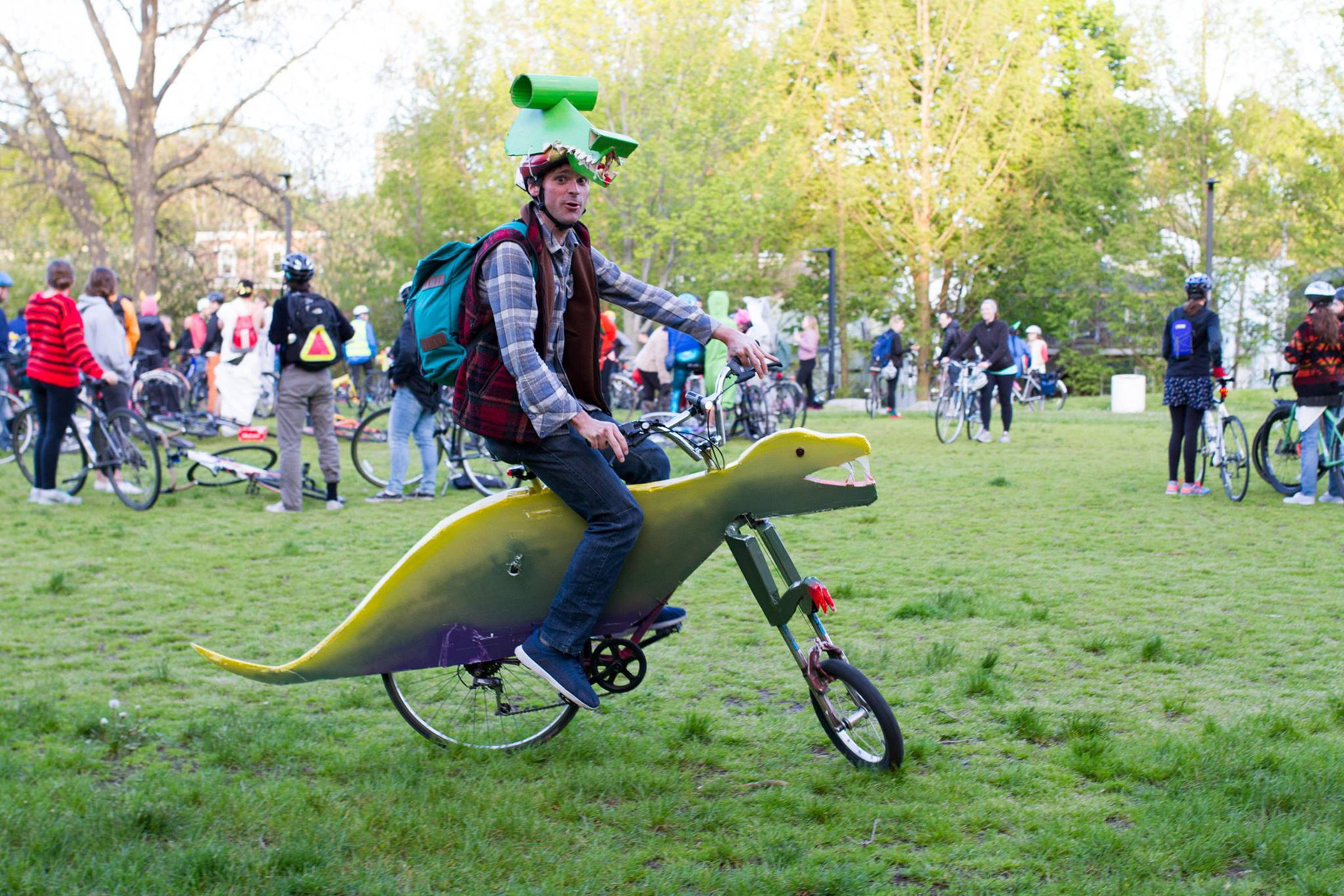 These semantics matter. I’m not a "bike commuter," I’m a person riding a bike home from work. It’s not the truck that cut the right turn too sharply and took the life of Anita Kurmann, it was a person, Matthew Levari, who decided to make that tragic maneuver. And the phrase "pedestrian" -- who would consider themselves a "pedestrian" when out on a walk to the store?!

Besides phrasing, the dehumanization of people who bike is real and can lead to serious consequences, like passing closely at a high speed in Australia or discriminatory enforcement in Springfield. This is why we need legal protections in place to hold people accountable for their actions, whether or not they’re subconsciously intentional. MassBike, with the Vision Zero coalition, has been working on legislation to secure a 3+ foot passing distance and is working through tough equity questions around automated enforcement. (It looks as if some legislation is moving -- please stay tuned for updates!)

Good laws are just one way in which we can change this culture of dehumanization on the roads, especially for an individual driver’s actions, but we also need to change dehumanizing perceptions at the highest levels, as exampled in Springfield. Because, in the end, if we think about bikers as "people on bikes," and drivers as "people in cars," and keep reinforcing it in our regular conversations, maybe the empathy will shine through and we’ll be given the space to feel safe on the roads. After all, we’re all just people on bikes and we’re all just trying to enjoy the ride.