Our representatives in Washington have been busy working to make sure bicycling concerns are included in the House Transportation & Infrastructure Committee approved the INVEST for America Act. MassBike has been working with our advocacy partners and our friends in Washington to make sure Congress authorizes transportation dollars that don't leave out folks on two-wheels. The bill is likely to be voted in the House within a week, so stay tuned for action alerts to reach out to your congresspeople! 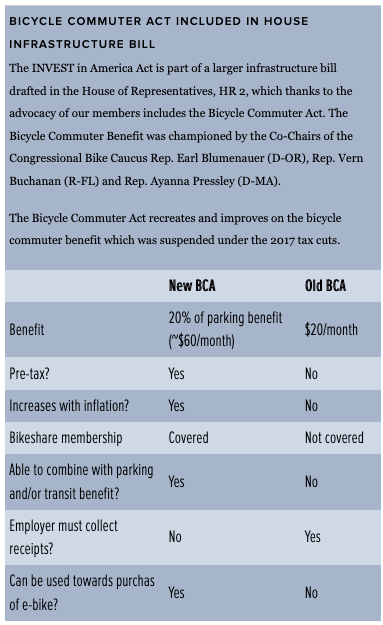 THANKS to Congresswoman Pressley (MA-7) for co-sponsoring the Bicycle Commuter Act and to Representative Neal (MA-1) for clearing its way through the Ways and Means Committee to have bicycle benefits included in the House Infrastructure Bill. With a little nudge from MassBike and our partners at the League of American Bicyclists, LivableStreets Alliance, Boston Cyclists Union, and Lyft (which is the operator of Bluebikes bike sharing system owned by the municipalities around Greater Boston), they were able to help shepherd the commuter benefit back into our transportation bill after it was suspended under the 2017 tax cuts.

Additionally, Representative Lynch (MA-8) led the inclusion of a National Road Safety Assessment that focuses on bicyclists and pedestrians by requiring the Federal Highway Administration’s district offices to identify and catalog roads and intersections that are unsafe for bicycling and walking. This will create an important tool for state and local governments--and for advocates--to identify priorities to target our advocacy where it's most needed.

We're proud to say bicyclists in Massachusetts are well represented in Washington, but we're still keeping a keen eye on this crucial legislation, and we'll be sure to reach out when we need help asking for support from our elected officials as this bill makes it way through the House of Representatives and onto the Senate!