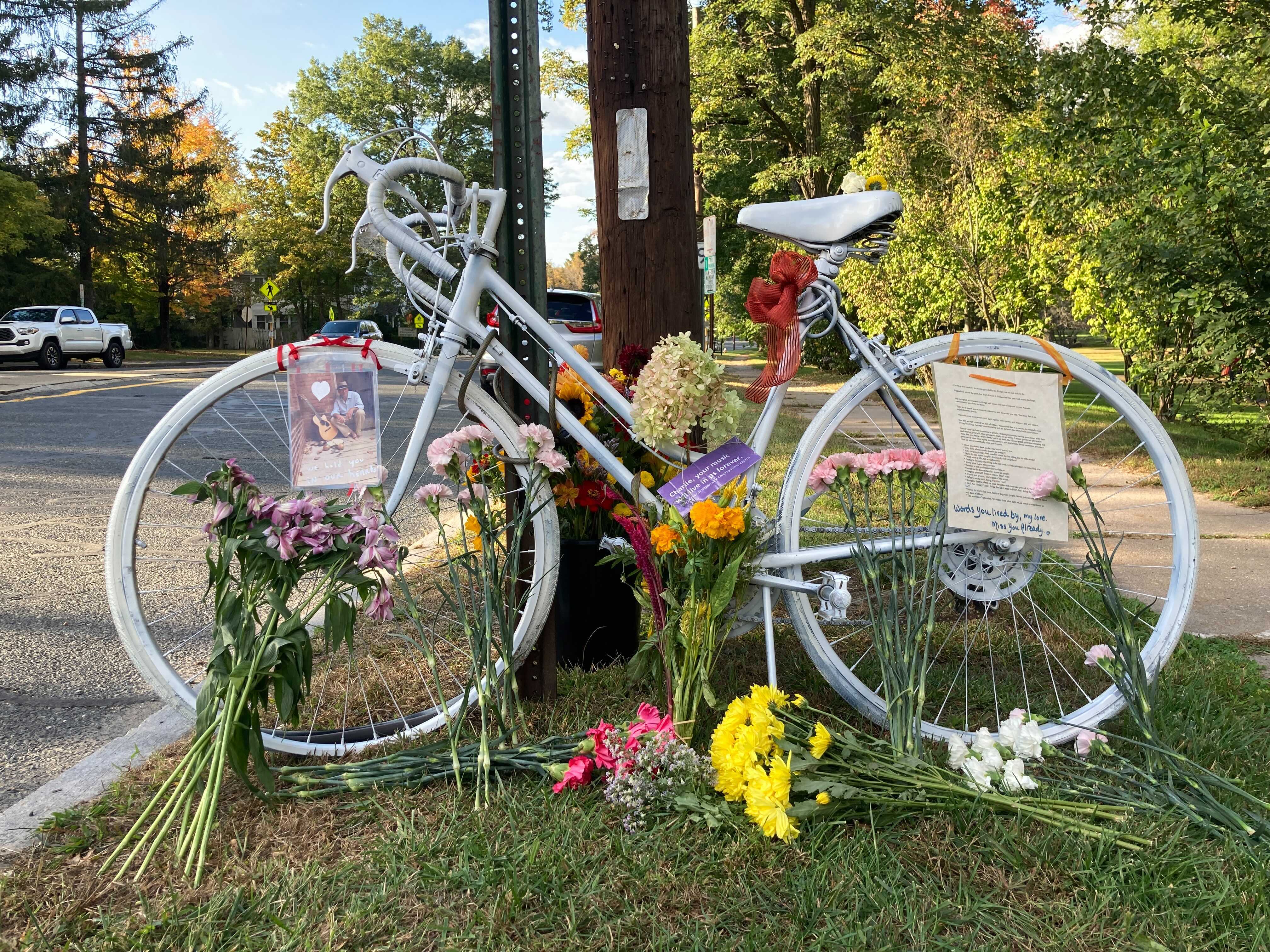 Most bicyclists know of ghost bikes, the white bikes placed at the scenes of a fatal crash to memorialize the victim and bring awareness to the dangers of the roadway. “No more ghost bikes” is a common refrain after a bicyclist gets killed. After a fatal crash, these bicycles are made by friends and family or bicycling advocates as a tangible reminder of a life lost and the work that needs to be done to increase roadway safety.

On October 6, I was riding my bicycle down Elm St in Northampton only to find the road at the intersection of Elm and Woodlawn was blocked off by police barricades. The police told me I could keep riding but had to stay on the sidewalk. As I rolled up alongside the blocked-off roadway, I saw a bicycle laying on the median and a big white X with the word “bike” spray-painted in the middle of the road. A car with a dent in its hood was parked on the center median, spray paint marking the location of each tire. My stomach sank. I later found out that the bike belonged to Charlie Braun, a local musician, and that he was killed in the crash. Two days later, I was included in an email with local bicycling advocates about putting up a ghost bike memorial only to find out that a memorial was already in place. Charlie’s friends and family created a touching tribute to him at the scene, including a white ghost bike. I immediately went to pay my respects to Charlie and view the memorial. As I pedaled up to the intersection police had stopped me at two days before, a heart-wrenching sight of a white bike chained to a “Share the Road” sign greeted me. Flowers filled the memorial during my visit, I cried for Charlie and how preventable his death was. Every time I pass by Charlie's memorial, I think about him and how much work needs to be done to make our roadways safer for bicyclists. 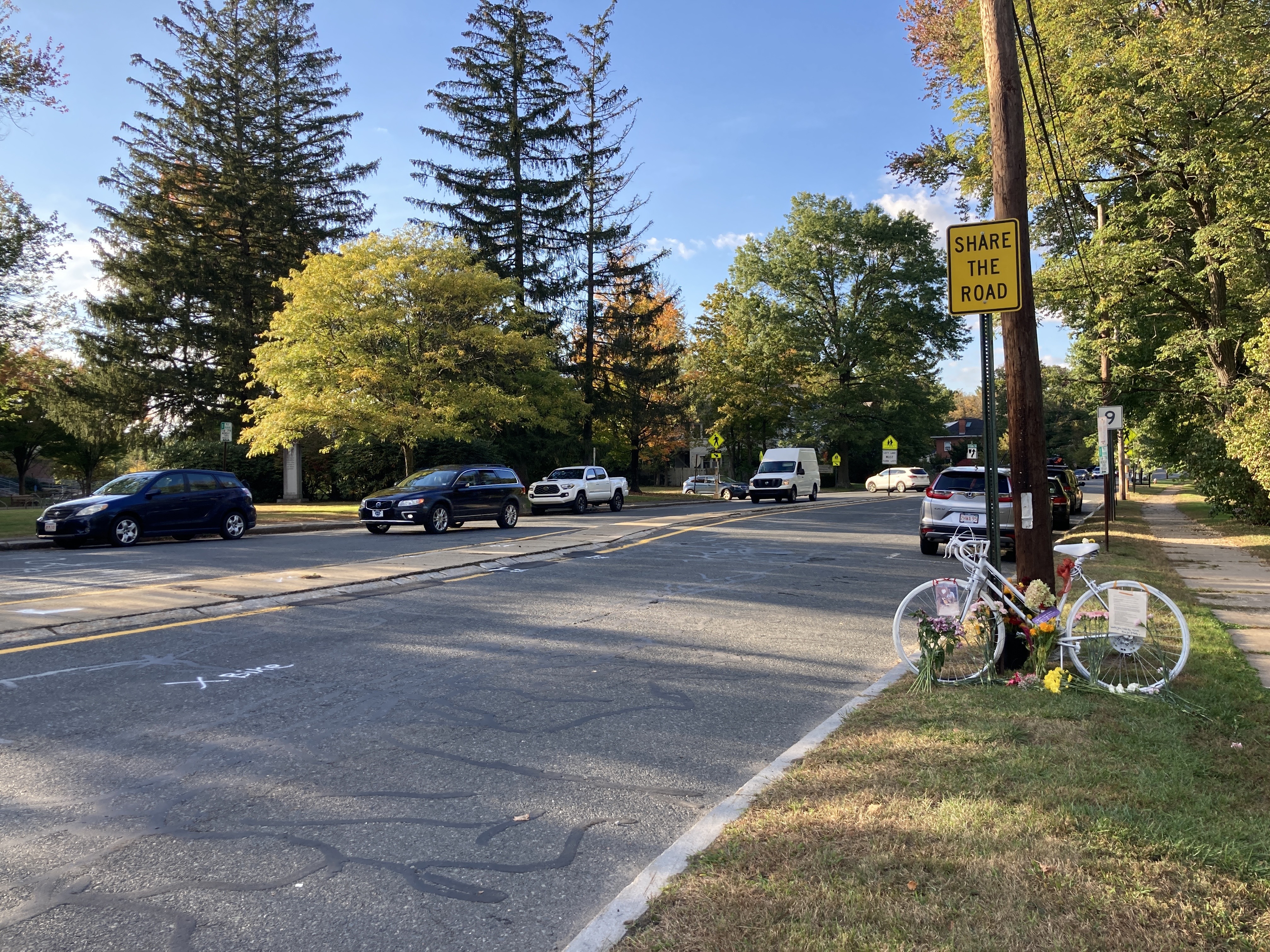 A few weeks after Charlie Braun's death, I found myself laying down a drop cloth in my backyard and shaking up a can of white primer to create another ghost bike memorial. The bicycle, an old cruiser, will become a memorial for Benjamin Kaplan who was only 29 when he died in a fatal bicycle crash in Lenox this past May. I watched as the blue bicycle slowly started to fade to white with each pass of the spray can as if all the color was washing away. I found myself crying as I painted. I thought about how going for a bike ride shouldn't mean losing your life. About how I've been fortunate enough to not need to make a ghost bike for a close friend or loved one. But if we don't increase roadway safety, one day I will or perhaps one will be made for me one day. It's a risk I take every time I leave for a ride, one that I try to tuck away in my mind, but making a ghost bike really brings your mortality into clear focus. After a few days of spray painting off and on, the bicycle was a crisp white and ready for installation. While this was my first ghost bike, I know it probably won't be my last in my role at MassBike. But I do have hope that one day, we will meet our goal of zero traffic fatalities and be able to put the spray paint away. 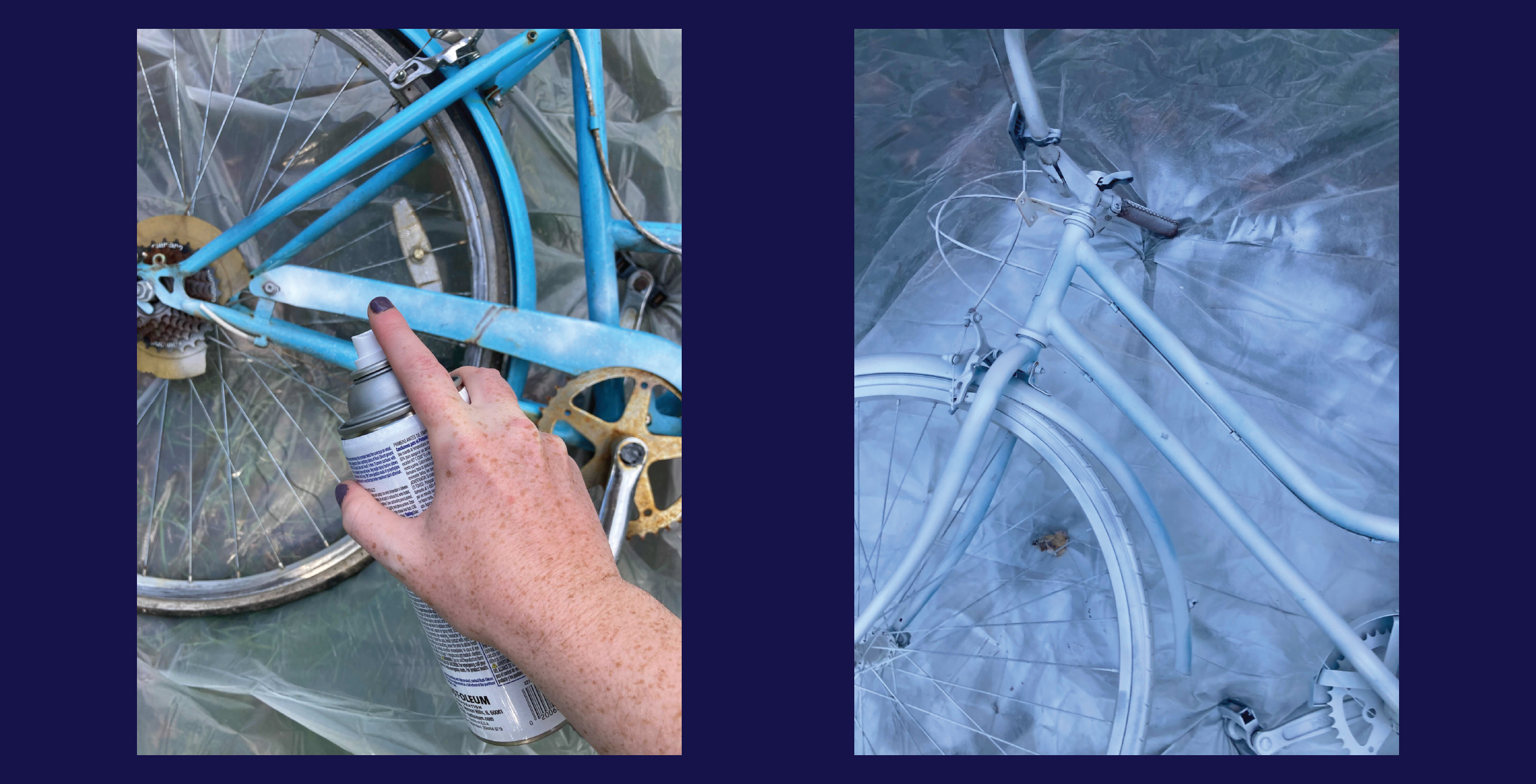 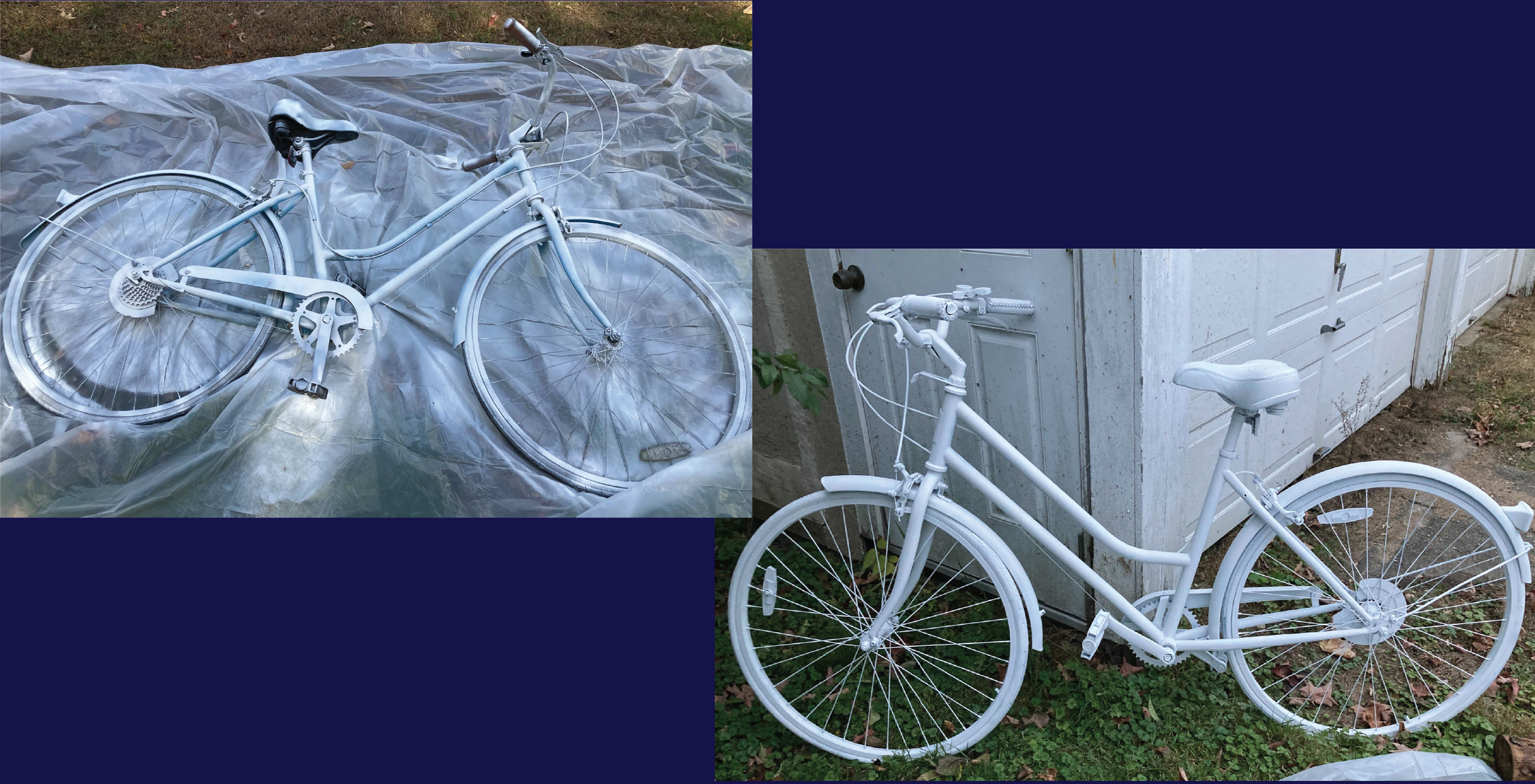 Here’s how you can help:

With your assistance, we can fill in this critical data to ensure ghost bike memorials across the state are taken care of and properly honor victims of fatal bicycle crashes. 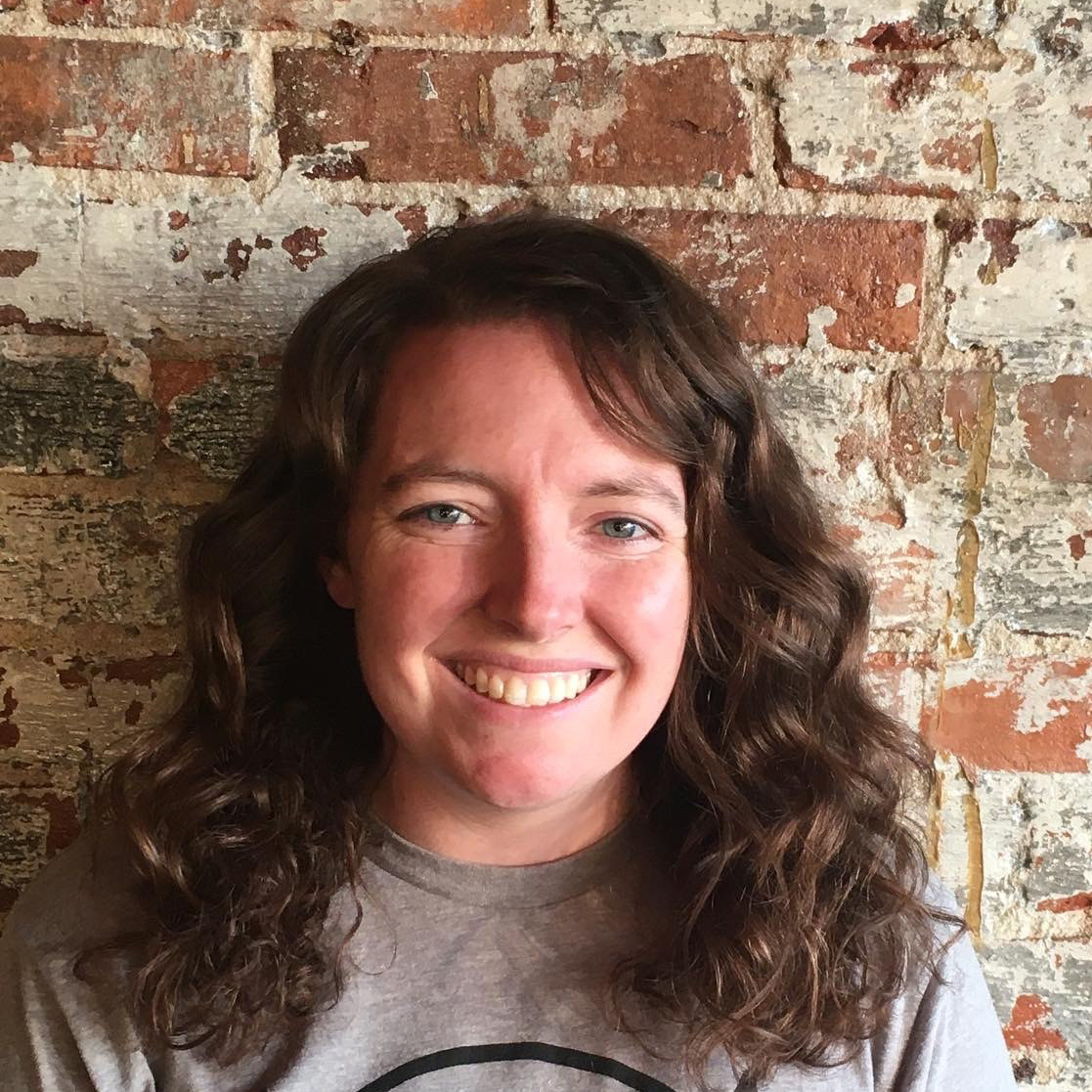 Jes grew up riding her bike on the Southern New England Trunkline Trail in her hometown of Douglas and started bike commuting while living in Boston. After being tricked into racing a mountain bike short track race on her hybrid commuter bike, Jes fell in love with bike racing. She has raced cyclocross, mountain bikes, and gravel. These days, you are likely to find her riding the rail trails around Northampton or on her mountain bike at Earl's Trails in Hadley.