How do we get more butts on bikes? E-bikes.

MassBike is all about getting more butts on bikes. And with the percentage of bike ridership throughout the commonwealth in the single digits, we need more people choosing to bike. So we are excited about a new type of rider out on our roads, paths, and trails -- the person on an e-bike with an electric motor.

There are plenty of riders out there who rely on electric-assist who otherwise wouldn’t bike. Maybe they’re recovering from an injury, or have aging legs, or want to keep up with their friends, or they need to travel longer distances, or have to ride over those damn hills, or need to get to work without being sweaty, or want to enjoy the woods while battling health issues.

This emerging ridership is a good development, as e-bikes bring the same benefits we all know from “analog” biking; improving physical and mental health, forging a connection to the advocacy community, and getting folks out into open space. And, as each bike on the road is one less car out there, e-bikes help tackle the two biggest issues facing the commonwealth: our environmental crisis with greenhouse gas emissions and congestion on the roads.

Yet the bicycle advocacy community is struggling to figure out whether e-riders fit in the same space traditionally allocated to standard bikes. Based on valid concerns mainly due to speeding and shared path etiquette, we are seeing advocates suggest blanket prohibitions for e-bikes on pathways and trails, equating them with motorcycles and mopeds, which means relegating these emerging riders to the hazards of the roadways, which we know keeps 60% of those "concerned yet interested" riders from heading out on two-wheels. So it's our charge to mitigate those issues to keep access open for e-bike riders. At a recent hearing held by the Dept. of Conservation and Recreation on the issue, an attendee fighting Parkinson’s disease put it well by stating “this wouldn’t be a prohibition on bikes, it’s a prohibition on people.”

For all intents and purposes, most e-bikes are designed to ride just as any other bike -- albeit with a bit of a kick. To help everyone understand where on the spectrum e-bikes fit, MassBike has been hosting educational e-bike demo days. One was held at the statehouse in May and over the next two weeks we will hold one in Walpole at Adams Farm on Tuesday 7/16, and one in Charlemont at Thunder Mountain on Monday 7/22. These upcoming events are free and open to everyone but we’re specifically inviting land managers, policy makers, and advocates to help inform sensible regulations for where these bikes should and shouldn’t be allowed. Read below for details on the event, I hope you can attend and will help spread the word to others who are interested. 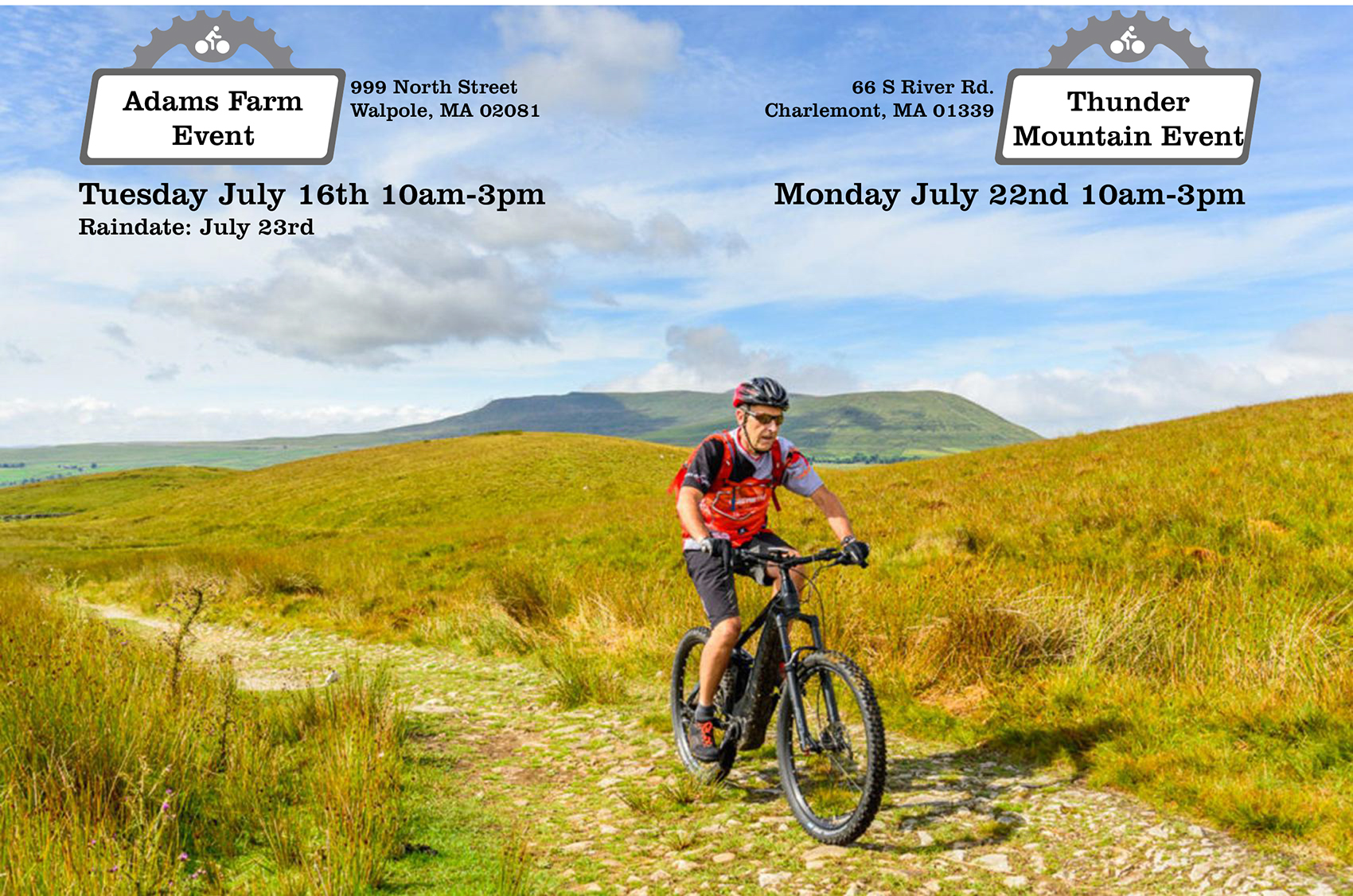 E-bikes have been the most contentious issue I’ve been tackling during my first year as executive director. E-bike ridership is on the rise (they were the only segment in bicycle sales that increased in the last year…), yet our laws around e-bikes were written with mopeds and scooters in mind, before the widespread adoption of modern battery technology. So, one of the ways we’re looking to clarify the issue is to define e-bikes as their own class of device in MA General Law. We are suggesting Massachusetts use the three-class model which differentiates between speed and type of assist and requires the motors to stop assisting at 20MPH for the first and second class of device. This distinction is in place across the country in 22 states, with 16 others that regulate e-bikes as bicycles that can use bike infrastructure. That’s 38 states ahead of where we are and we need to catch up fast.

As for where e-bikes can ride, MassBike recommends that in the absence of local ordinances, the slower Class 1 and Class 2 e-bikes be allowed wherever bicycles are allowed, while the faster Class 3 e-bikes would only be allowed on roadways. Of course, cities and towns and local jurisdictions would retain the right to restrict, regulate, or prohibit the use of e-bikes in parks, paths, and trails. 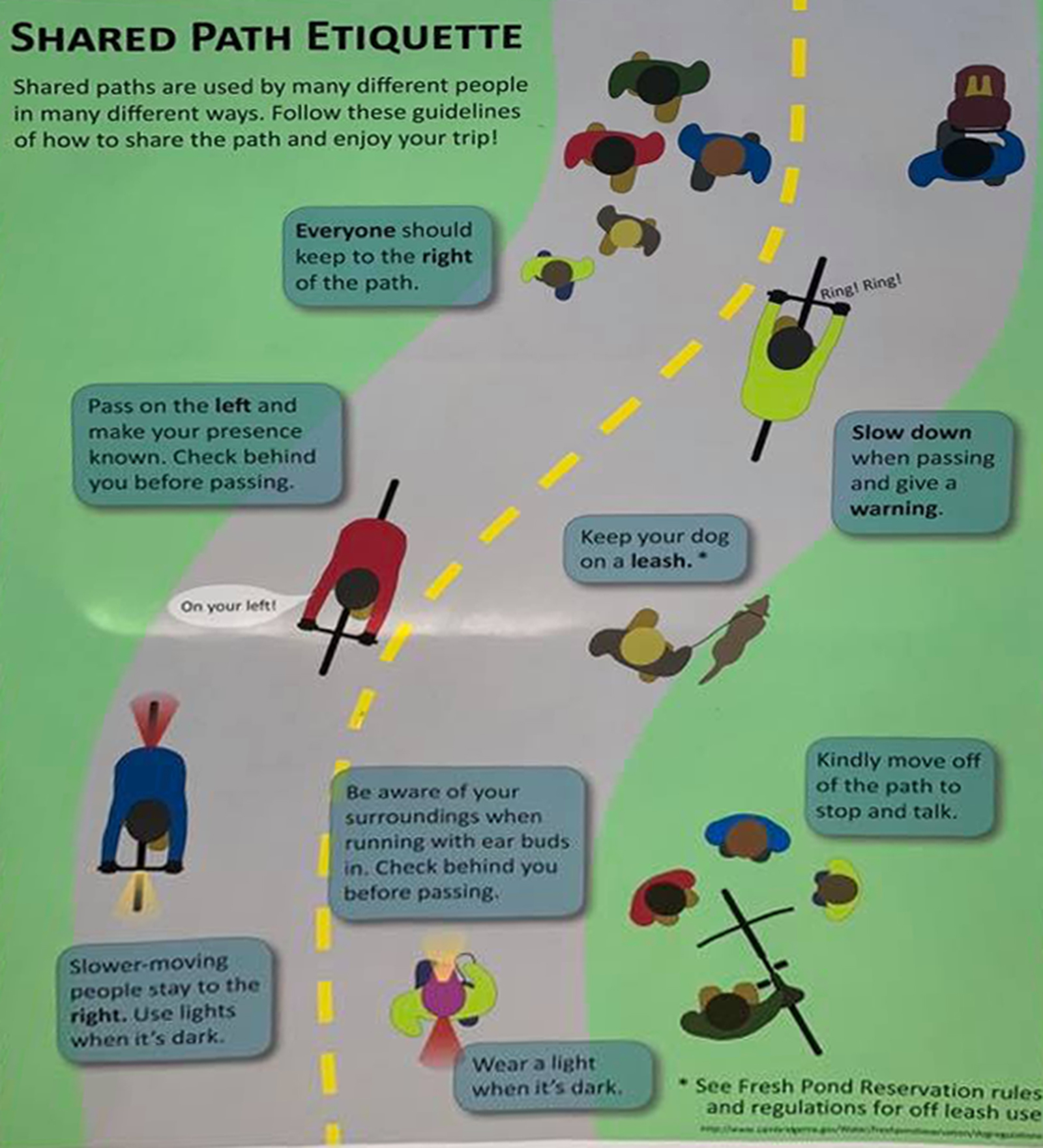 As I’ve workshopped this around the state for the past year, talking with riders, advocates, and policy makers, I’ve heard much of the same concern. Mainly, it’s how 20MPH is too fast on a lot of pathways, including on my daily commute from Allston along the Paul Dudley White Bike Path. I agree. However our proposed legislation is geared toward the device, and not the user. We’re not mandating 20MPH as a recommended speed limit, and the legislation would not prevent jurisdictions from setting speed limits on pathways and trails. Instead, the intention is to make it simple for regulatory bodies to identify distinctions between the types of e-bikes, based on the industry standard, so they can be clearly permitted in context.

The issue we haven't figured out is how to legislate differences for single device that can be used safely at 20MPH on roadways and clear paths, but needs to be slower on crowded and more narrow ways. Essentially, we don't believe legislation is the ideal place to say something like "tops out at 20MPH on roads, 15MPH on pathways, and 12MPH on crowded paths and off-road trails.” These should be defined in the rules set by a regulatory body for a specific path and trail, which is currently the case for most mountain bike access, and defined by “Rules of Conduct” which state you can’t operate in a reckless manner.

(as it relates to shared path etiquette, see the image above -- a proper etiquette how-to sign along the Fresh Pond pathway in Cambridge)

And frankly, the concern about speed is not limited to electric bikes -- as I'm sure we’re all concerned about all bikers doing 20+MPH on the pathways just the same. There are jerks out there, we’ve all been buzzed by people riding too fast who don’t give warning. One recent anecdote I heard was from a mountain biker stopped for riding fast by a hiker who thought they were riding with e-assist and called it “cheating” (they weren’t, but perception matters). Speed is a pervasive problem throughout the advocacy community, especially on our beloved paths and trails. At the same hearing hosted by the DCR, I asked attendees “who can go faster than 20MPH under just leg power” -- everyone raised their hand. No one is saying limit your gearing to prevent you from hitting more than 20MPH. 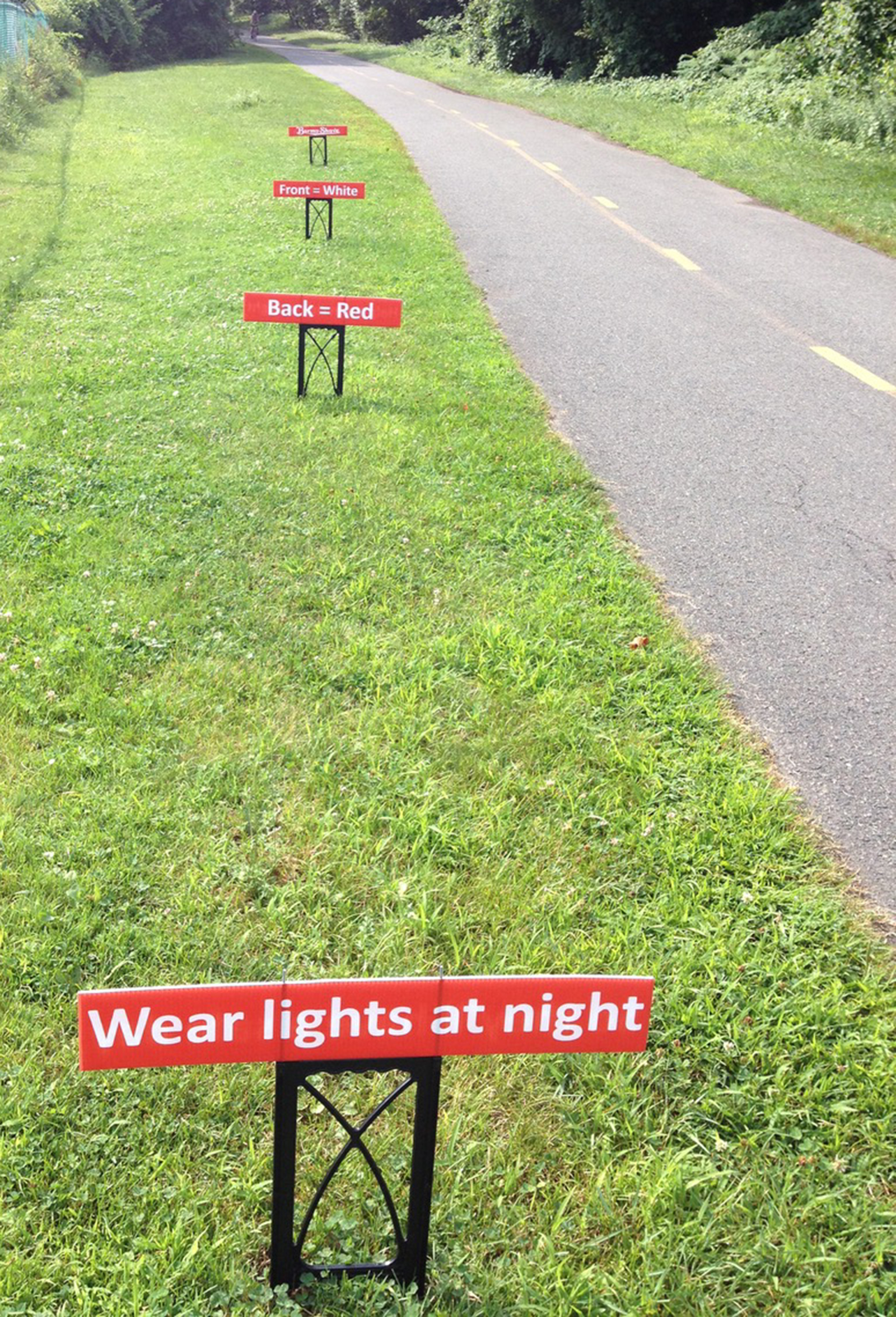 If the e-bike concern really is a speed concern and e-bikes do make it easier to hit faster speeds, then it’s up to the advocacy community to slow people down through education and self-enforcement. We can’t expect the DCR to have a ranger out on every path with a radar gun… But examples like the Friends of the Lexington Bikeways with their “burma shave” signs encouraging slow speed, using lights, and using a bell, and Trail Courtesy signs, and the Friends of the Falmouth Bikeways signs, and Cambridge’s shared use poster around Fresh Pond are great starts. Slowing folks down and being mindful of a shared trail is truly our great challenge. 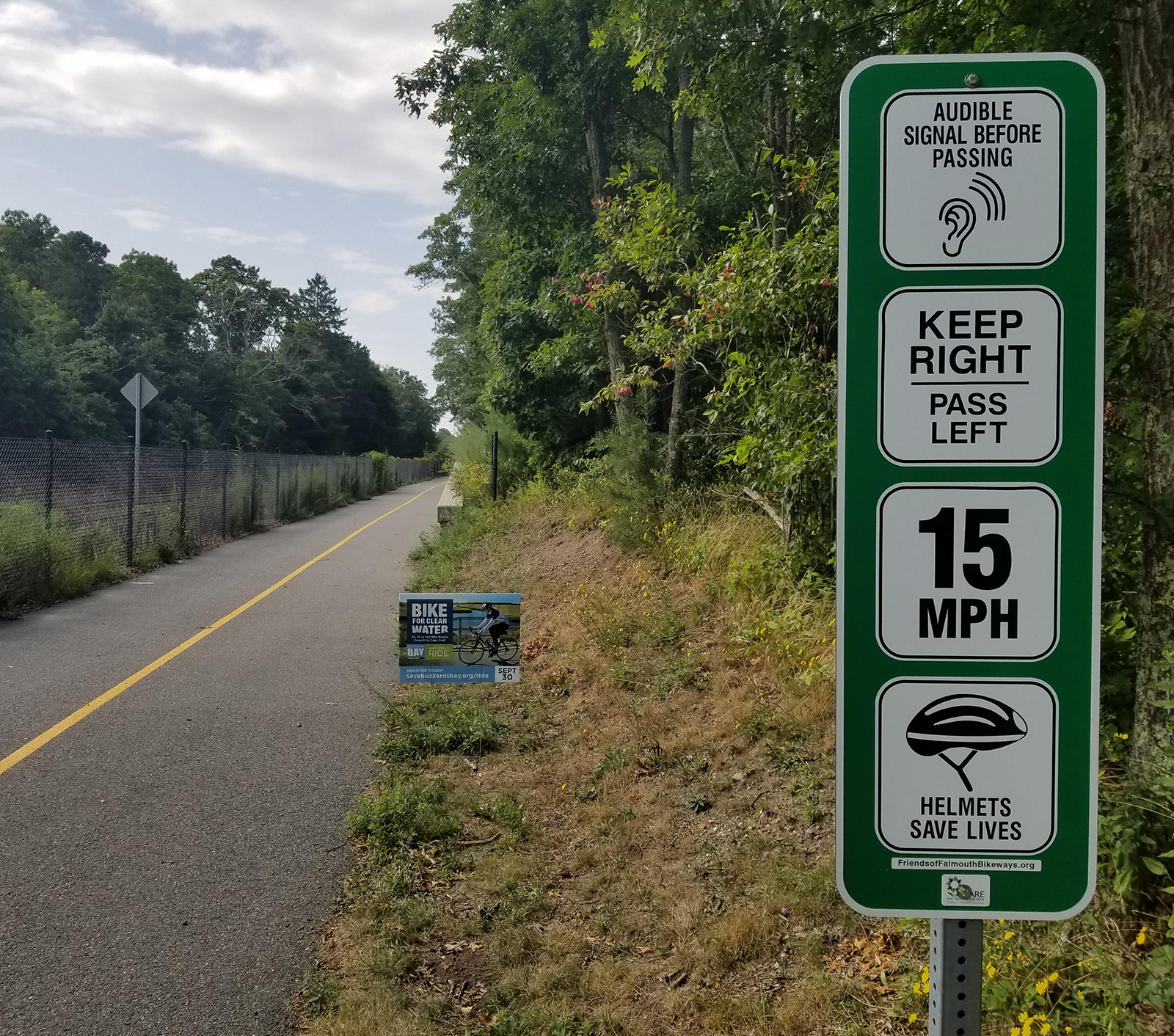 In the end, MassBike's aim is to be welcoming and bring better bicycling for ALL riders. I realize it’s a controversial issue and you may not need electric assist for your riding, and that's fine. I'm not expecting all riders to understand everybody's needs. But as current trends continue, we're going to see a lot more e-bikes out there and as an advocacy organization we certainly should not oppose e-bikes outright as that will just leave us out of the conversation. Instead I’m positioning MassBike to get out ahead of the issue and make ourselves a leader here. There are places e-bikes should ride and places they shouldn’t. And as this is being worked out, your help and feedback is important to me.

I hope you can support MassBike in our efforts to craft sensible e-bike legislation and regulations and if you are concerned or interested in the issue please join us by attending our e-bike demo days to help better inform our advocacy. Because, in the end, another rider is another butt on a bike.