MassBike's Letter to DCR on E-Bikes 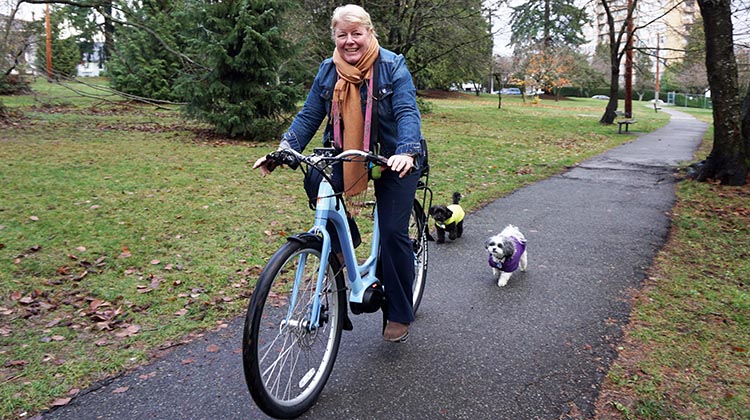 Last week, MassBike put out a call for your help, to join in the conversation on e-bikes and submit your comments to the Dept. of Conservation and Recreation in regards to their proposed regulations that would pertain to pedal-assist bicycles.

We appreciate the desire for the DCR to allow Class-1 Pedal-Assist Electric Bicycles on improved trails over 8' wide (like rail trails). However, we disagree with the proposal to prohibit the use of pedal-assist bikes on "improved DCR trails that are less than 8 feet in width, dirt roads that are not open to vehicular traffic, and any natural surface trails, regardless of width or other conditions," and compiled our feedback for the DCR to review.

We received several hundred responses in support of our call to action and we greatly appreciate your support and your comments. It makes a difference! We were thrilled to hear so many stories from so many of you about why access for e-bikes is important for you and your family. Thank you to all of you who provided comments on this topic and sent your feedback to the DCR.

As we put out the call for your support and letters, we also wrote our own. You can read the full text of that letter below:

Dear Ms. Dietz and the Office of General Council,

I am writing today to comment on the 302 CMR 11.00: Parkways, Traffic, and Pedestrian Rules and 302 CMR 12.00: Parks and Recreation Rules, specifically as they pertain to electric bicycles allowed on DCR properties.

Firstly, I thank the DCR for their effort to create regulations that would allow pedal-assist bicycles on improved paths 8’ and wider. Pedal-assist bicycles are a benefit to an emerging community of bicyclists in Massachusetts, as they bring more riders out onto our bike paths and trails throughout the state. In our experience, electric pedal-assist bicycles provide just enough added power many people need to feel comfortable and confident out on two-wheels.

As we have all heard from the governor that the biggest threats to the commonwealth related to transportation are greenhouse gas emissions and traffic congestion, electric bicycles help alleviate both these concerns by providing an alternative form of transportation that allow riders to travel farther, over steeper terrain, and with less effort. Combining these benefits with the emerging trails network that will connect across the commonwealth, e-bikes will soon become a real and attractive form of transportation for people who may not ride otherwise.

However, electric bicycles are also beneficial to bring about health and wellness benefits, the same provided by standard bicycles. They are tools for exploration and self-empowered transportation. They provide access to the natural environment and open space. They allow aging riders, or new riders, join their friends and family on rides. They provide the exercise essential in recovery from ailments, and the prevention of worsening ailments. The list goes on, and we have heard from so many people throughout Massachusetts about the benefits electric bicycles bring – as I’m sure you have the same from this public comment period.

For these reasons, MassBike is fully support of electric bicycles as a way to get more people out enjoying the benefits of bicycling.

In our effort to pass legislation that sensibly categorizes these devices, we have partnered with the advocacy organization People for Bikes to pursue a three-class model in MA General Law that would mirror what 23 other states have defined as electric bicycles. We have supported Representative Hecht and Representative Fernandes and Senator DiDomenico in their filing of H3014/S2071, ‘An Act relative to electric bicycles,’ which are identical bills that clarify electric bicycles and distinguish them as distinct from “motorized bicycles” so jurisdictions can regulate electric bicycles for their intended use. This bill creates a three-tiered class system that differentiates based on how the electric motor engages, and the top speed of the motor. The importance of classifying electric bicycles in this manner will create clarity so electric bicycle riders, regulatory bodies, retailers, and land managers who are already dealing with electric bicycles have sensible classifications from which to regulate their use.

These bills define an electric bicycle as a device with 2 or 3 wheels which has a saddle and fully-operative pedals for human propulsion and an electric motor having a power output of not more than 750 watts. An electric bicycle would meet one of the following three classes:

Cities/towns and regulatory bodies would retain the right to restrict, regulate, or prohibit the use of e-bikes in parks, paths, and trails. MassBike recommends that in the absence of local ordinances, the slower Class 1 and Class 2 e-bikes would be allowed on paths and trails, while the Class 3 e-bikes would only be allowed on roadways.

In order to fully explore the issues of electric bicycle legislation and regulations MassBike has hosted several events and listening sessions throughout the state over the past year. We have engaged our members on this issue and have heard hundreds of comments from people concerned about this issue; from rail trail “Friends of ____” groups, to official Town Committees, to police officers and rangers, to individual riders, and more.

Much of the shared concern revolves around how 20MPH max speed is too fast for some paths and trails, and we agree (I commute daily on the Paul Dudley White Bike Path and am equally concerned by speed and user conflicts). However, this concern is relative to the user of the bike, and not the device itself, as we feel an electric bicycle can be safely ridden at 20MPH on roadways and clear paths, but needs to be slower on crowded and more narrow ways. Essentially, MassBike does not believe that legislation is the ideal place to say something like “tops out at 20MPH on roads, 15MPH on pathways, and 12MPH on crowded paths and off-road trails.” This is best left to the rules and regulations of a given road, path, and trail, and best governed by bicycle riders themselves.

Frankly, the concern about speed is not limited to electric bikes -- as I'm sure we’re all concerned about all bikers doing 20+MPH on the pathways just the same. There are jerks out there, we’ve all been buzzed by people riding too fast who don’t give warning. Speed on narrow ways is a pervasive problem throughout the bicycle advocacy community, especially on our beloved paths and trails. At the hearing hosted by the DCR in Brighton, I asked attendees “who can go faster than 20MPH under just leg power” -- everyone raised their hand, yet no one was willing to limit their bicycle gearing to prevent them from hitting more than 20MPH.

We fully support efforts to slow down riders where necessary, including the use of speed limits on paths and trails, education through signage and more, and pathway designs that “calm” riders to prevent them from hitting dangerous speeds. And we support proposed DCR regulation CMR 12:12 (9): “No person shall operate any bicycle, pedal-assist electric bicycle, in-line skates, scooters, skateboards or similar equipment in a reckless manner, or at a speed which may be considered unreasonable or improper for existing conditions.” However, we do not support the belief that electric bicycles will induce more “reckless” riders than standard bicycles do, and we have seen no empirical data or studies to suggest otherwise.

We have also heard from riders and advocates about access on natural surface trails, who are concerned that electric pedal-assist Class 1 bicycles will be ridden at dangerous speeds and cause undue wear/tear on trails. MassBike respects the viewpoints presented by these advocates, and in an effort to learn about the issues facing electric bicycle riders in Massachusetts, MassBike has conducted two natural surface pedal-assist demonstration days, in addition to an event we held at the State House in May. The two events were held at Adams Farm in Walpole to demonstrate how pedal-assist bicycles handle on dirt trails through fields, and at Thunder Mountain Bike Park in Charlemont to demonstrate how pedal-assist bicycles handle more challenging terrain (and wet, it rained buckets on us). Each event was supported by a variety of bicycle manufacturers and bike shops who brought bikes currently sold in Massachusetts in order to discuss what exactly these devices are. The purpose of these events were for citizens, policy makers, land managers, and advocates to ride the bicycles to learn firsthand about this technology, and to address concerns about how these bicycles handle on a variety of terrain, on road and off road. We had a few dozen attendees for both events, some of which I’m sure have submitted public comments based on their experiences.

The outcome of these events lead MassBike to believe that pedal-assist Class 1 bicycles are reasonable for some off road and natural surface trails. We do not agree that pedal-assist bicycles are on par with “motocross bikes” or “motorcycles,” and we do not believe the trails we rode were undergoing more wear. Due to the complex terrain, when I tried these bicycles I was unable to reach a speed nearing 20MPH, and never felt the bicycle was out of control or that I was forced to ride recklessly. Yet even though the trails we rode in Adams Farm and Thunder Mountain may have been acceptable for pedal-assist Class 1 bicycles, this may not be the case for all trails, and our stance is that the allowance or prohibition of pedal-assist bicycles should be determined on a trail-by-trail basis, as is the case with most mountain bike access, and similar to the park-by-park regulations for boating and hunting on DCR properties.

1) the DCR not enact regulations that do not follow the 3 Class model for defining “electric bicycles,” or wait until such a time that electric bicycle definitions are codified in Massachusetts General Law.

3) the DCR not enact any proposed prohibitions without proper analysis, studies, and research of e-bike impacts, including crash data and wear on terrain, when determining where differing classes of electric bicycles should and shouldn't ride, especially for off-road natural surface trails and for bikeways and multi-use paths.

To prohibit the use of all electric bicycles on natural surface trails, on paths less than 8’, and for all Class 2 and Class 3 electric bikes on DCR properties would be to limit bicycle riders across the commonwealth. As one commenter put it very eloquently at the public hearing in Brighton, “this wouldn’t be a prohibition on bikes, it’s a prohibition on people.”

Thank you very much for the consideration of these comments.