Boston – The Massachusetts Department of Transportation (MassDOT) has announced that construction of the Tri-Community Bikeway will begin in the spring to create a multi-use path system from Winchester to Stoneham with a western spur to Woburn.

This is one of many projects this year which are part of MassDOT’s ongoing efforts to help reduce greenhouse gases, connect the public to important destinations with pedestrian and bike corridors and reduce vehicular traffic on local roads. The shared-use Stoneham-Winchester-Woburn Tri-Community Bikeway will be approximately six and a half miles long, connecting Recreation Park in Stoneham to the Wedgemere Commuter Rail station in Winchester, with a “Horn Pond spur” terminating at Horn Pond in Woburn.

“The Baker-Polito Administration is in the business of helping people get to where they are going in a safe and efficient manner,” said Transportation Secretary and CEO Stephanie Pollack. “The goal is to think multi-modal when we design capital projects and by offering the public direct pathway connections to important destinations we give people safe options for travel on foot or on bicycles.”

“MassDOT is committed to expanding our networks of paths for walkers and cyclists,” said MassDOT Bicycle and Pedestrian Program Coordinator Pete Sutton. “By finding ways to connect our existing infrastructure and promoting alternative transportation options, we can create a more efficient and eco-friendly transportation system.”

The Tri-Community Bikeway will include safety crossing signals, asphalt paths exclusively for cyclists and pedestrians, and shared roadways equipped with bike lanes. The project will also incorporate a new, prefabricated pedestrian bridge over the Aberjona River in Woburn.

MassDOT estimates the project will be completed by the fall of 2018.

The number of Americans who bicycle to work increased by 62 percent between 2000 and 2014 according to Urban Land Institute’s 2016 report, “Active Transportation and Real Estate: The Next Frontier.” The report also stated that Boston has the tenth-highest bicycle commuter rate of any large American city at 2.4 percent. Given this data, the Tri-Community Bikeway is an important step in providing safer travel for the increasing number of bicycle commuters.

This $5.3 million project will provide economic stimulus by enhancing accessibility to area schools, businesses, parks and the Wedgemere and Winchester Center commuter rail stations. This will give travelers more options to get where they need to go while fostering a less carbon-dependent transportation structure.

A joint report by PeopleForBikes and Alliance for Biking & Walking titled “Protected Bike Lanes Mean Business,” noted that the slower speed of bicycle travel compared to motorized travel results in more visibility for local businesses.  Because the Tri-Community Bikeway will run through downtown Winchester and Stoneham, also nearing downtown Woburn, it represents strong potential for economic growth throughout the area.

The Baker-Polito Administration has several initiatives to improve pedestrian and bike infrastructure and they include:

Multi-use paths and planning for bicycle and pedestrian travel are funded in the MassDOT Capital Budget. For example, the CIP sets aside $60 million, ($15 million annually beginning in FY18), for projects that will address missing links in pedestrian and bicycle networks.

The image below depicts the route of the Tri-Community Bikeway. 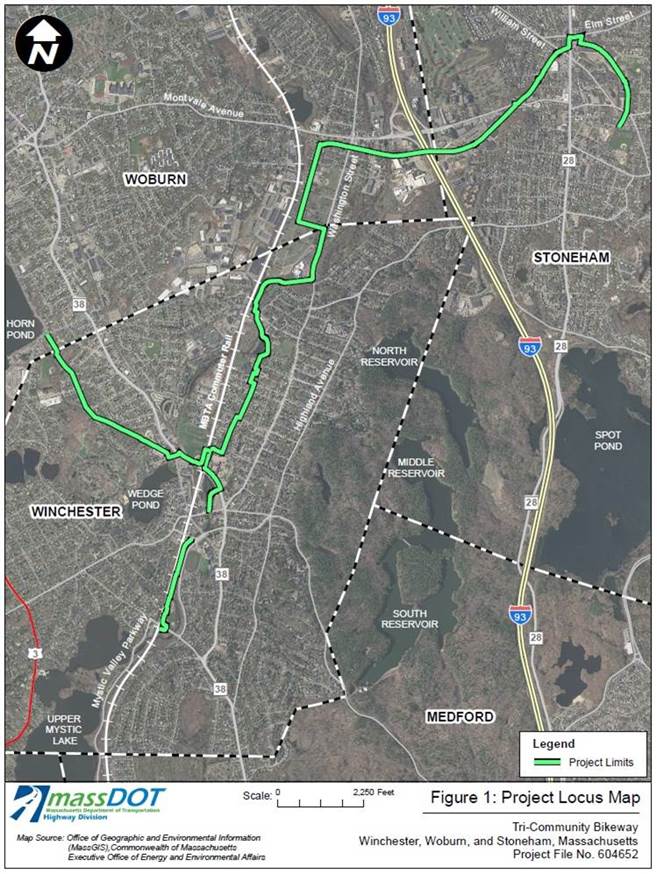