Thank you for considering people who walk and bicycle in MassDOT’s proposed redesign of the Route 107 corridor between Salem and Lynn. The redesign will be a dramatic improvement over current conditions, providing additional safety for existing users while encouraging additional walking and biking trips in the corridor.

The bike, pedestrian, and transit components of this corridor are a part of the long-term solution to transform 107 into an appealing boulevard which will support developments and redevelopments which do not solely depend on car traffic for success. For decades, this road has suffered from auto-oriented highway planning which created conditions where only auto-oriented retail and residential developments could thrive. Automobile dependency, in turn, created the demand for wider roads and squeezed out almost all street life. With this redesign, MassDOT has the opportunity to balance transit, walking, and biking with automobiles, thereby making the Route 107 corridor more connected and more livable for everyone, and changing the context in which future redevelopments will occur.

We applaud MassDOT for providing continuous, often generous, sidewalks along with convenient crossings at all four legs of each intersection for pedestrians, along with continuous bike lanes, with additional striped buffers from traffic in locations where automobile speeds are expected to be higher. This design, if built today, would certainly be an improvement over what Route 107 currently has.

While the MassDOT plan is an important step forward, we believe that a "bolder" design which reduces pedestrian and bicyclist stress even further will have more universal appeal and broader public support as this project continues to develop. To that end, we have outlined a number of recommendations for improving upon the proposed design.

1) Redesign the corridor with an awareness of Bicycle Level of Traffic Stress.

Thank you for introducing the much-needed  concept of Level of Traffic Stress (LTS) to the general public. We believe that in addition to LTS, every project should contain explicit reference to "design users and conditions," and that those users should include children, the elderly, and people with disabilities who use bicycles as a mobility aide, and that those users should be able to safely navigate the system at all times of day and in all weather conditions. Every portion of the project should be explained in terms of how it meets the needs of these users, and project teams should design a facility which meets their needs before addressing automotive LOS. If additional funds are needed to maintain automotive LOS after meeting the needs of the area’s most vulnerable design users, then that extra cost should be attributed to the automotive portion of the project, not the portion of the project which supports the vulnerable (bike lanes, sidewalks, etc.).

MassDOT is proposing 11-foot travel lanes throughout the corridor in order to accommodate truck traffic. However, 10-foot lanes are used successfully on roadways throughout the Commonwealth which have high volumes of truck traffic. One example is Binney Street in Cambridge, which has 10-foot lanes next to a bike lane. Binney Street is the hazmat detour for the Central Artery. Indeed, if that route can have 10-foot lanes without incident, so can 107. Ten-foot lanes will reduce vehicle speeds while allowing wider sidewalks, bike lanes, or buffers. The combination of slower vehicle speeds and more space for pedestrians and cyclists will improve safety for all road users.

3) Eliminate landscaped medians throughout the corridor.

Medians, like wide travel lanes, encourage speeding and reduce the space at the edge of the roadway that can be used to make safety improvements for people who walk and bike, such as wider sidewalks and separated bike lanes. Medians also reduce “friction” from oncoming traffic, which while at first glance seems to be a benefit to safety since it limits left turns, in reality often reduces safety because it makes drivers feel that they can drive much faster than they should. When plantings or trees are provided along a street, as they often should be, they are much more useful at the sides of the street rather than in the middle. Not only are trees more likely to survive and thrive there, they are much better incorporated into sidewalks or bike lane buffers. Space in the middle of the street is essentially “dead”, but space on the sides can be used by people.

Striped bicycle lanes and sharrows are helpful for legitimizing the presence of cyclists on the roadway and for alerting motorists to their presence, but painted lines on the roadway only have a modest impact on increasing safety and increasing bicycle ridership. In urban areas, vehicles illegally park in bike lanes, forcing cyclists to swerve into traffic. Paint-only bike lanes often also place cyclists in the door zone of parked cars. Sharrows encourage cyclists to ride in the center of the lane, but their presence is often not welcomed or effective on busy roadways where vehicle speeds are significantly higher than biking speeds. We therefore urge MassDOT to:

In the Northern Corridor segment, the proposed design reduces the sidewalks from 9’ (5’ with a 4’ planting strip) to 7’ with no planting strip. This planting strip acts as a buffer between pedestrians and traffic and also provides a place for plantings and trees outside of the walking path of pedestrians. Losing this buffer would degrade the pedestrian experience.

6) Include bike lanes on the portions of intersecting streets within the project scope.

The goals for the intersecting streets should be to provide proper accommodation for bicyclists, minimize the length of the crosswalks and to encourage drivers to drive safely and slowly. Sharrows may be an acceptable solution where the posted speed limit and design speed are at or below 25 mph, but are not appropriate for any portion of Route 107 itself.

7) Provide safe and convenient signal timing for pedestrians and bicyclists.

Where walk signals are concurrent to a green traffic phase, there should be a 5-second leading pedestrian interval, and the walk signals should come on without requiring pedestrians to press a button. Where there is an exclusive pedestrian phase, No Turn on Red should be posted at all approaches. The addition of bicycle signal phases (with separate bicycle signal heads) should be considered where special movements are needed for bicycles, where significant car/bike conflicts are expected to occur, or where it may be desirable to include a leading bicycle interval.

Providing fast, frequent, and reliable bus service will be a key component of making this a livable corridor.

9) Clarify further the design of the shared street at Boston Street.

A shared street is typically one where there are no curbs, no lanes, and no signals. The surface of the street is consistent from edge to edge, usually pavers or some other textured material. People on foot, on bikes and in motor vehicles all share the street and negotiate with each other, traveling slowly and safely. Bollards are sometimes provided to prevent cars from driving into buildings. At intersections, a roundabout can be provided (but does not have to be.) However, such features are not shown in the presentation. What appears to be shown is simply bike lanes that end in some sort of pavers, along with a standard roadway intersection design. We find this design to be confusing and hope that MassDOT will clarify it further, ideally into something similar to what we have just described.

We have come up with our own proposed cross-sections for the 3 segments of the project that incorporate the general principles we have outlined above. For all of these, intersections would look different, of course, but we are confident that there is room for left turn lanes and physically separated bike lanes.

Lynn Corridor SegmentWe have removed on-street parking from the north side of the street in order to make room for the physically separated bike lanes. 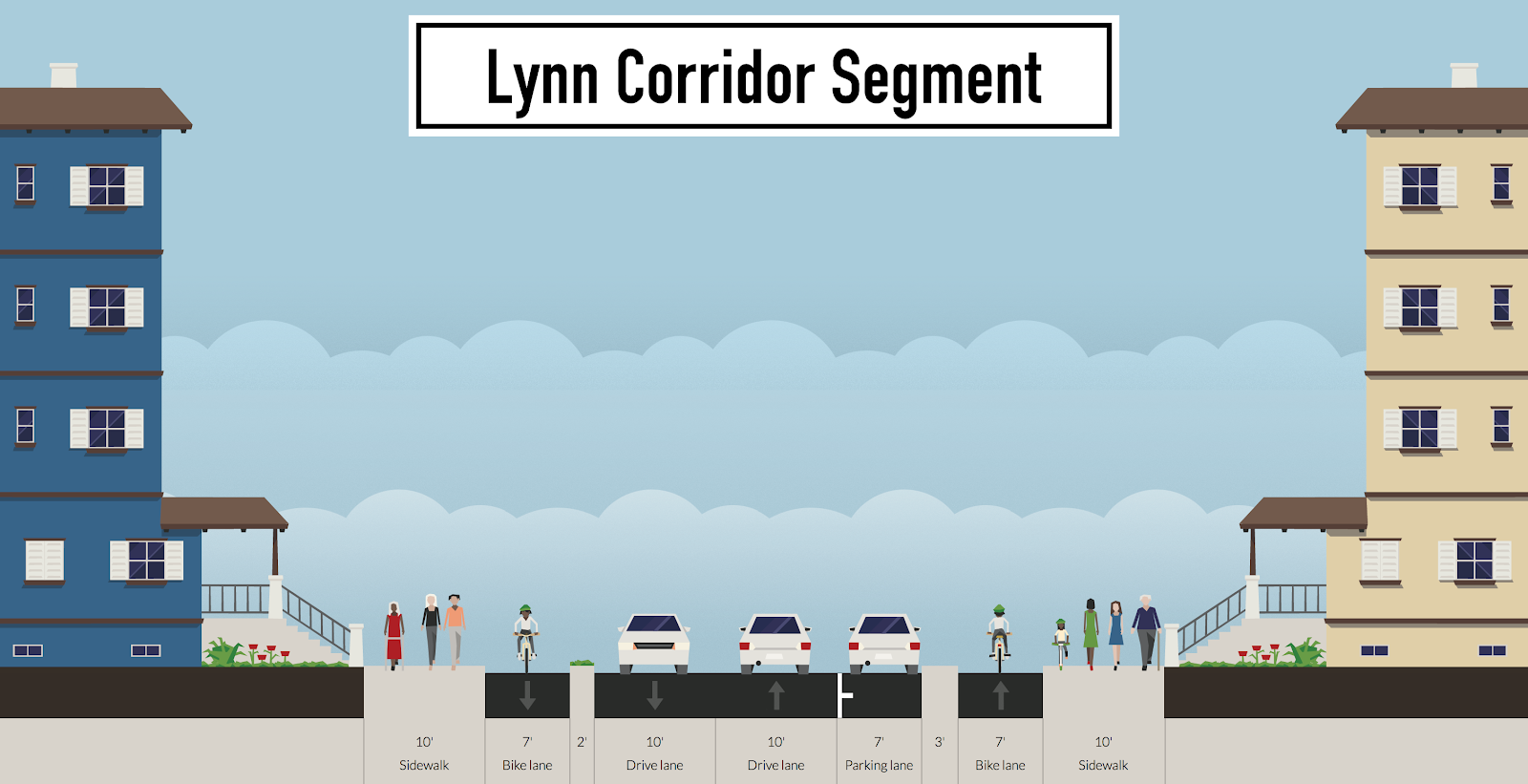 Retail Corridor SegmentWe removed the median and we were able to widen the sidewalks, add wide planting strips with trees between the sidewalks and physically separated bike lanes on both sides of the street. 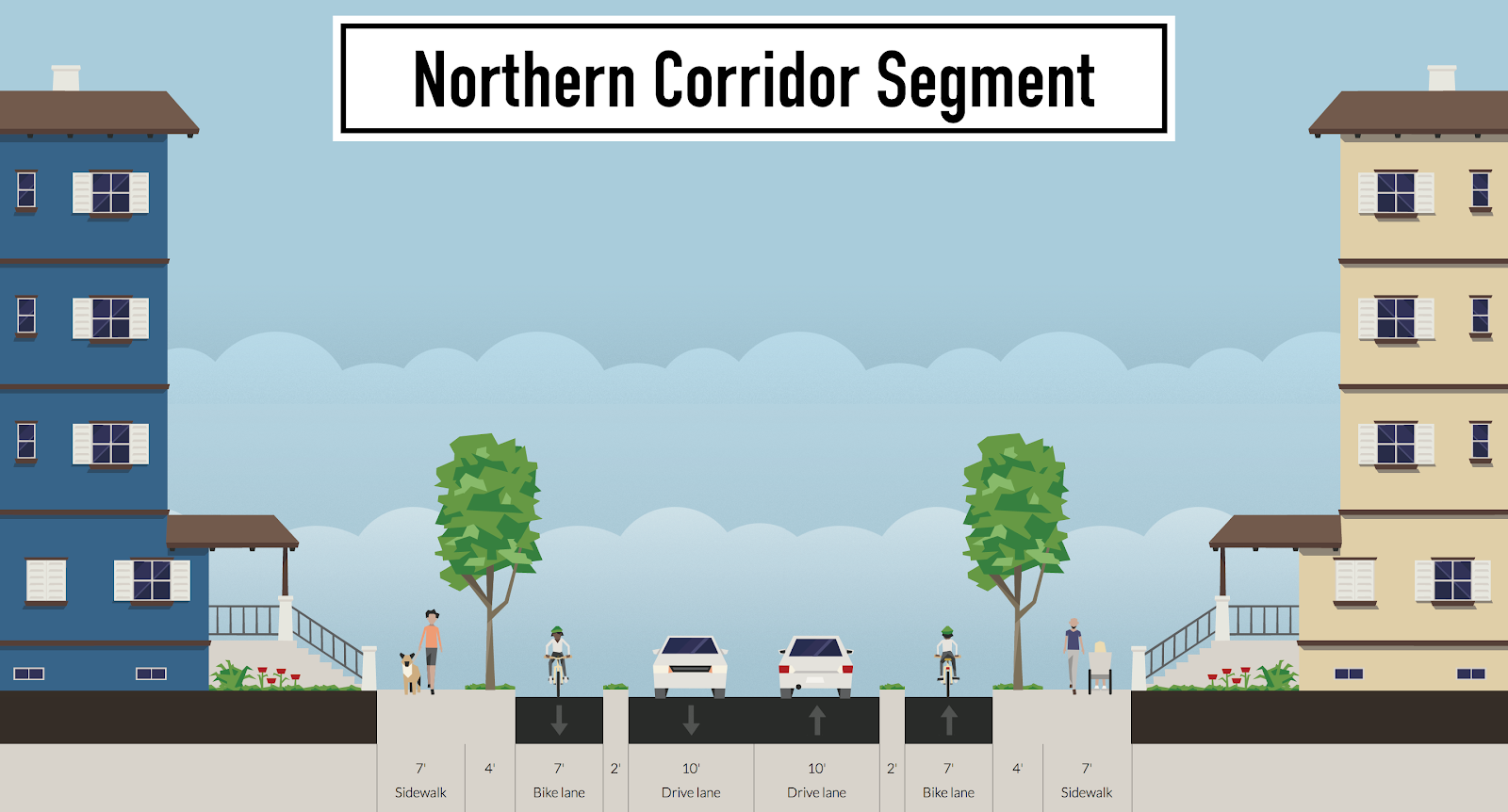 Thank you again for the public outreach and collaborative process you have created for this project. We look forward to working with MassDOT and local leaders to provide input as this project develops further. Please feel free to contact us at any time for further clarification on our feedback and suggestions.

So what can you do to help?

First, you can review the MassDOT plans here.

If you agree, and want a more livable Highland Ave, here's what you need to do, before November 4th:

Prepare an email, in your own words, which says, "I support a livable Highland Ave, and the advocates’ recommendations."

Send your email to:

3) If a Salem Resident, to Mayor Kim Driscoll ([email protected]) , and to your Ward Councillor (City Council emails here, and a Ward map here)