Should Business Make Way for Bicycles?

Biking has many advantages over driving a car and biking obviously improves one’s own health, but did you know that biking also increases a city's well-being? In the fall of 2007, when New York City put in their first protected bike lane (a lane separating bike lanes from car traffic using permanent barriers, such as Jersey barriers or medians), the stores along the bike route reported a 49% increase in sales versus a 3% increase in the rest of the city. 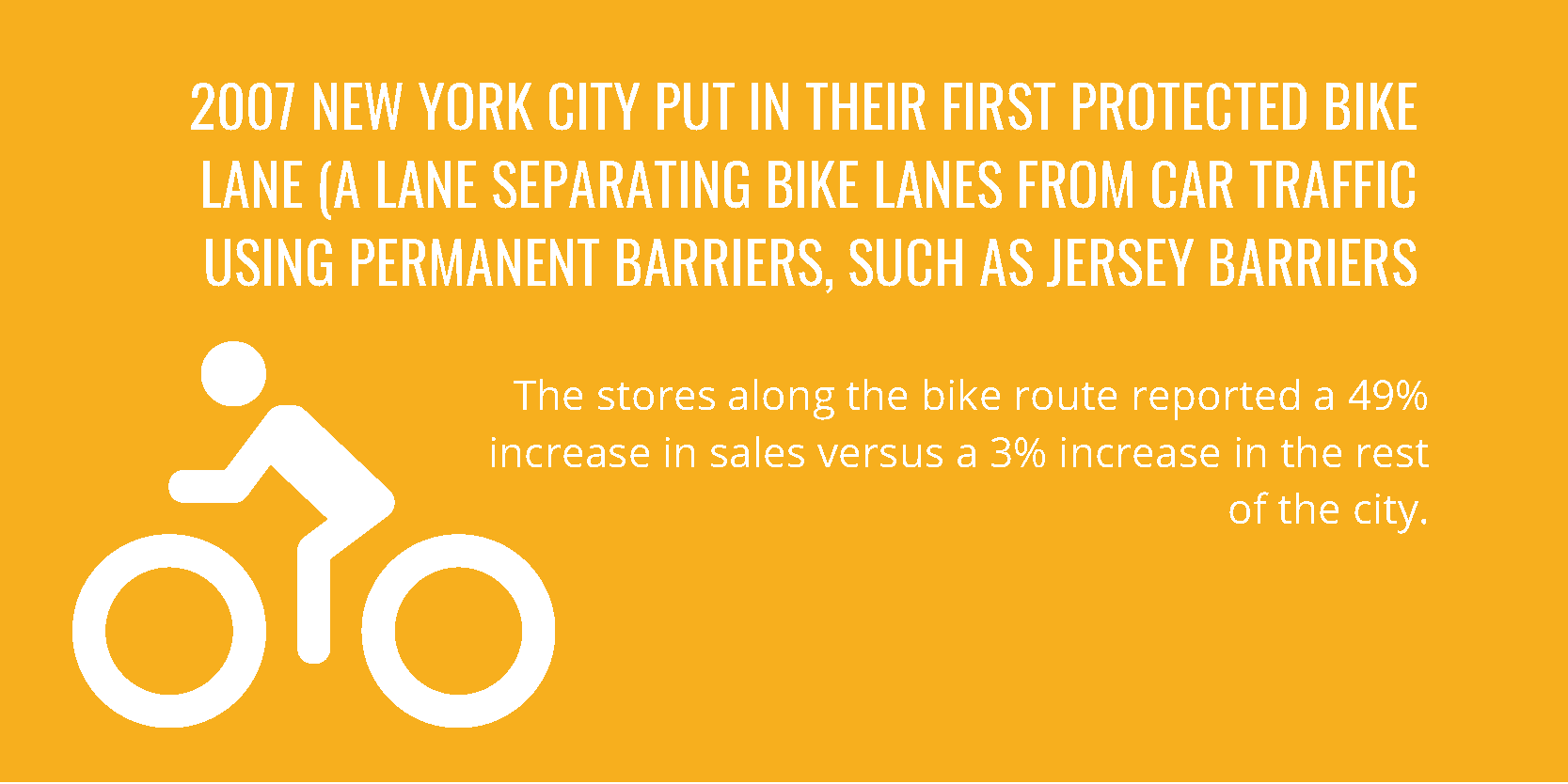 According to the U.S. Bicycling Participation Benchmarking Study Report from 2015, 15% of all Americans (45.1 million Americans) had ridden a bike at least once a year for transportation purposes. That might appear to be a high percentage until one delves a little deeper. Of that 15%, only 11% of those people rode their bikes to work 104 days a year or more. If we consider this, only 1.65% (4.96 million) people in America are committed to cycling as a means of transit. 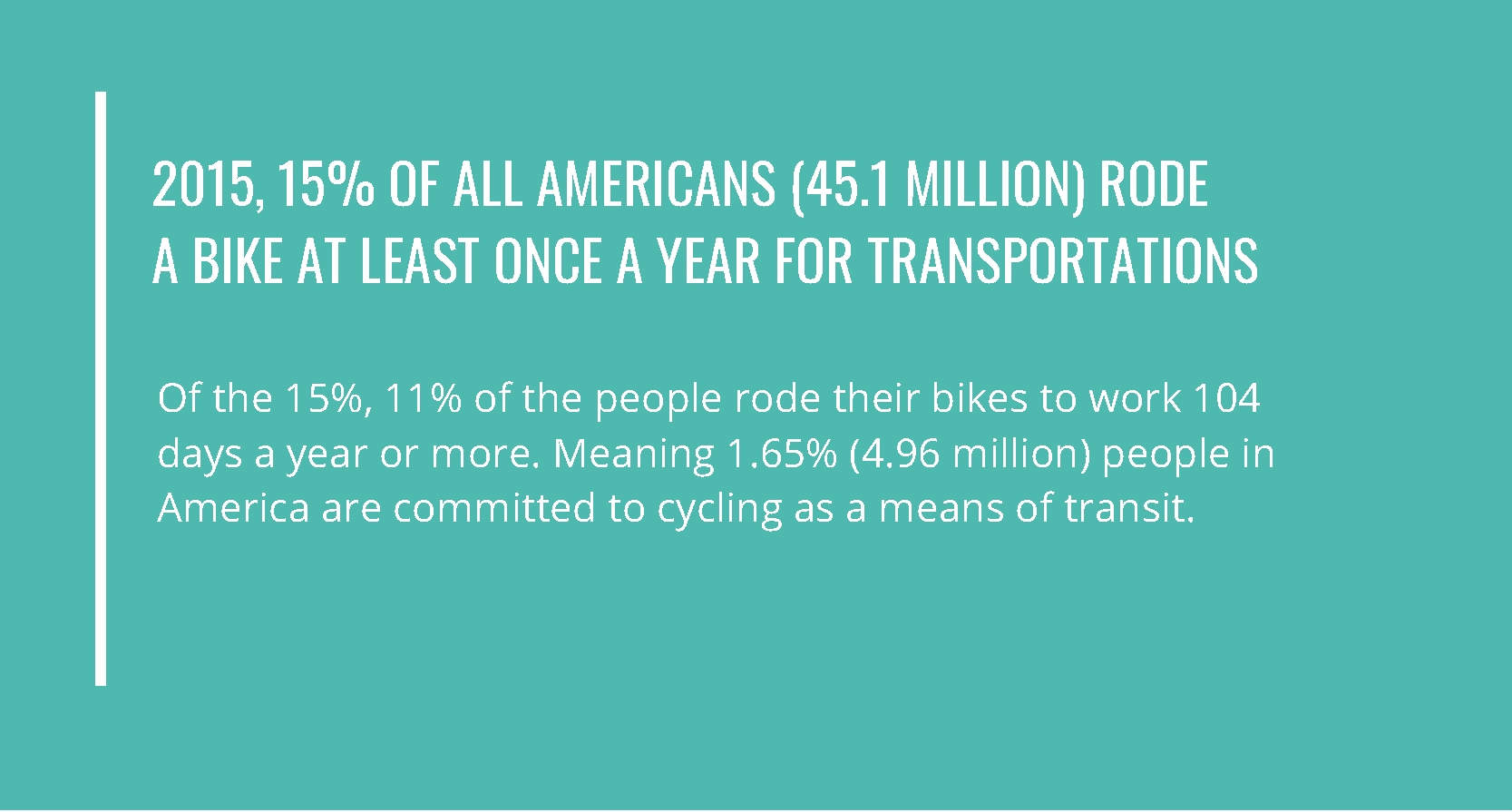 How would these US biking statistics compare to another country? The Netherlands may be an extreme example, but a good role model nonetheless. According to the Special Eurobarometer 422a Quality of Transport report from 2014, when asked about their preferred modes of transport, Netherlanders used their bicycles 36% of the time. The United States has a long ​way to go to catch up to these bicyclists! 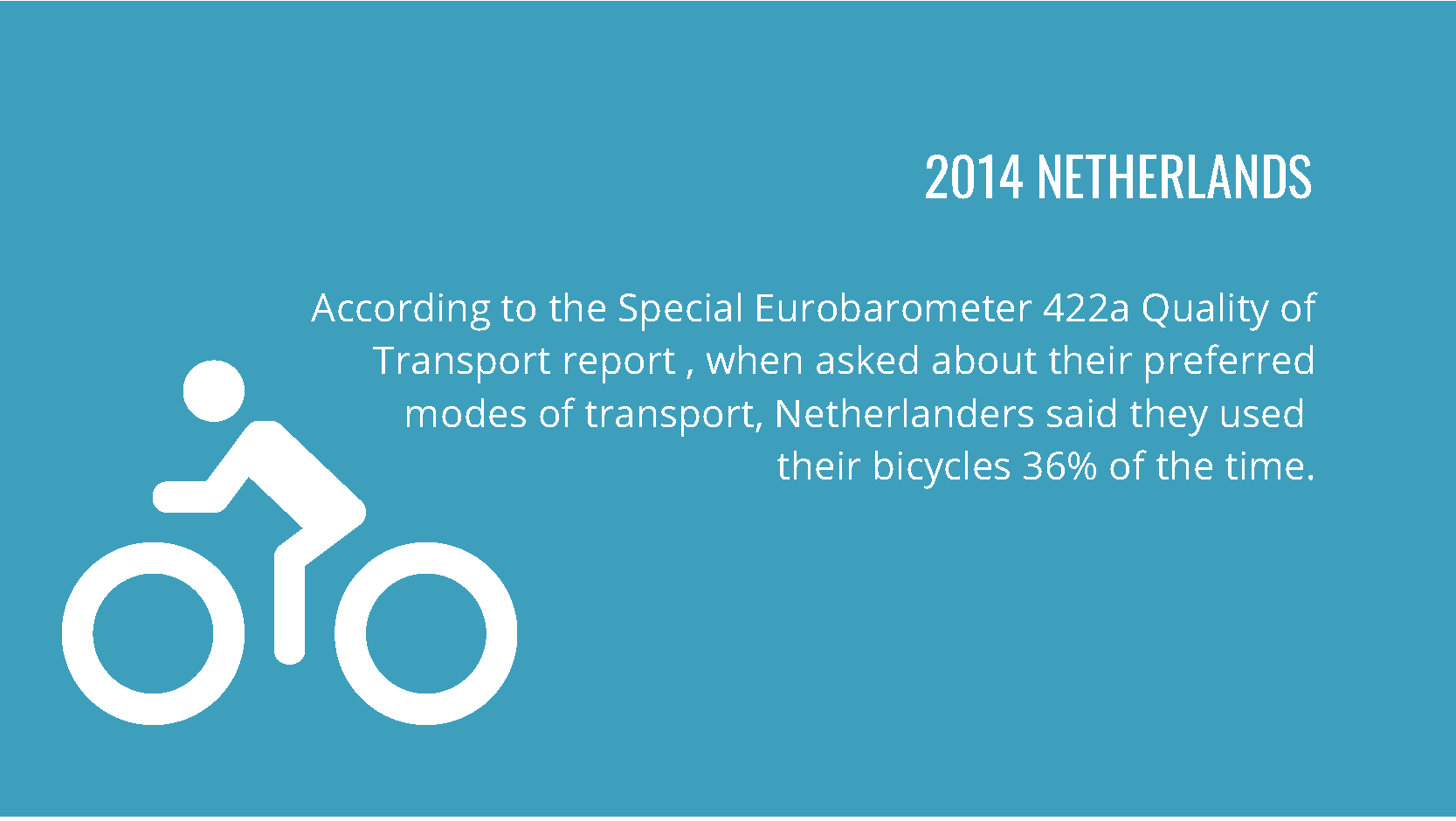 The U.S. Department of Transportation reported in 2010 that 86.1% of people in the United States used cars as their main means for commuting. However, the story is a bit different for dense urban cities that were established before the widespread use of cars. In these areas, the percentage of people who commute by car is far less than in other areas of the country. Dense urban areas have different modes of commuting than their less-urban counterparts. In 2010, the New York City Department of City Planning reported that fewer than 5% of the people who work in Manhattan drive a car to work. While cars remain undeniably important to the transportation needs of much of the US, dense urban areas work differently. Many other large cities in the US have similar patterns when it comes to commuting.

A promising trend is developing; from 2000-2009 in Chicago, New York City, Boston, Portland, Seattle, San Francisco, and Washington DC, the relative number of people who commuted by car decreased from 6.0 to 12.7%. At the same time, the number of people who cycled increased from 50.2 to 230.0%, maybe we have headed in the right direction after all!

One of the main factors preventing people from biking is infrastructure. According to the U.S. Bicycling Participation Benchmarking Study Report, 52% of people interviewed are afraid of getting hit by a motor vehicle, 46% percent of adults reported being more likely to ride if they were separated from cars, with only 31% satisfied with existing infrastructure. If we look back at the Netherlands, they have so much more than just bike lanes, with a national bike path system, streets with bikes as priorities, and they even have bicycle highways! 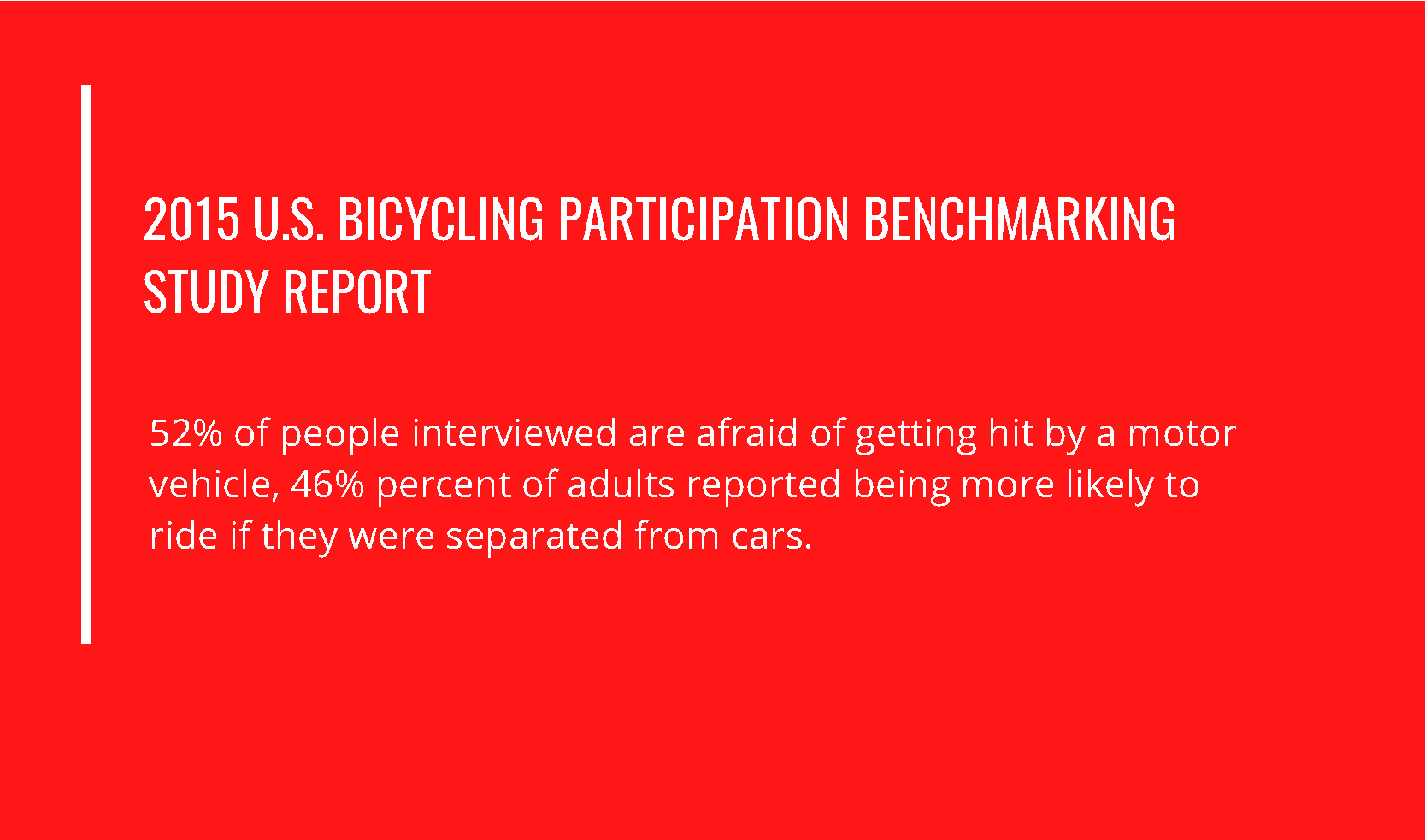 What if more American cities introduced dedicated and protected bike route infrastructure? There is evidence that supporting bike infrastructure improves economic health. In a 2012 study by the New York City Department of Transportation, protected bike lanes contributed to a 49% business increase on Ninth Avenue from 23rd Street to 31st Street.

Dedicated bike lanes also have a positive effect on business occupancy. In Manhattan’s Union Square, there were 49% fewer commercial vacancies, compared to a 5% increase borough-wide. In another case, on First and Second Avenues in the East Village, not only was there a large increase in bicycle volume, but it was accompanied by 47% fewer commercial vacancies compared to 2% more vacancies borough-wide. Bicyclists also spent the most money per week in that area as well. On average, $163 was spent by bicyclists, $158 by walkers, $143 by motorists, and $111 was spent by people who took the subway. A large increase in cycling coincided with the new protected bike lanes, and other bike routes.

Bike lanes are more cost-effective than building and maintaining roads. It costs $445,000 to build a bike lane per mile, compared to $2 million to $5 million for a mile of two-lane, undivided road, depending on where you live. Another advantage of bike lanes over roadways is that they can be built fairly quickly, as seen in Seville, Spain. Seville constructed 75 miles of bike lanes in less than two years. As a result, between 2006 and 2011, the number of cycling trips increased four-fold, from approximately 13,000 to a peak of 72,000. That’s a lot of trips! This may cause one to wonder why the current bike paths in their local hometowns aren’t showing a similar increase. It may be due to the type of bike route the town has.

There are multiple types of bike lanes that can be installed alongside roads. Sadly, not all desired infrastructure is feasible. Not all places have the necessary space to establish greenways or protected bike lanes where a rider is separated or ‘protected’ from the road by parked cars, shrubbery, or some other barrier.

No need to despair, there are other options! ​Sharrows, a combination of the words ‘arrow’ and ‘share’ is an increasingly common type of biking infrastructure. ​Although not a dedicated bike lane, the markings on the road remind drivers to share the road with bicyclists. Of course, there is the standard bike lane that is usually a shoulder converted into a bicycle only space. Some bike lanes have green paint on the lane to inform their purpose. Others are only painted green near intersections, and some just forgo paint altogether, leaving the lane only with symbols of bicyclists to indicate the bike lane. Perhaps better than the standard bike lane, is the buffered bike lane. This lane is similar to the standard bike lane, but there is a large amount of painted space that separates traffic from the adjacent bike lane, providing strong visual awareness for motor vehicles not to cross the line. The painted space separating them is the ‘buffer’ that neither cars nor bikes can be in. There are a lot of options to choose from!

Not surprisingly when it comes to alternatives to cars, there is a fair amount of controversy regarding dedicated road space for bike lanes. However, many of the arguments against them are not well-founded, speculative, and fear-based. One concern is that dedicated bicycle lanes may create congestion and pollution due to cars being stuck in traffic more often. If this were the case, the Interstate Highway System should have eliminated traffic years ago! Most of the time widening a road only creates more traffic. Reducing the amount of road space cars have can also decrease traffic, so bike lanes don’t have as much of a negative impact on creating congestion as people may think. It may actually reduce congestion because more people might opt to bike more. The fact that bike lanes never look busy is another objection. However, this observation is a testament to their efficiency, not flaws, as most bike ‘traffic’ would be near red lights. Another objection to bike lanes is that cyclists will not follow traffic rules so therefore new bike lanes should not be built at all. However, motorists break the rules much more often. Another claim is that bike lanes are dangerous for pedestrians.  Although accidents can happen, it is much harder to kill someone with 200 pounds of combined human and bike weight than with a 1.65-ton car.

There’s a concern that bike lanes will reduce car parking spaces, but the effect of replacing parking spaces with dedicated bike lanes is not negative and, on the contrary, can be quite positive. Take, for example, Bloor Street in the Annex District in Toronto. When attempting to put in a bike lane that halved the available parking, the business owners on Bloor Street believed that the majority of their customers came from cars and objected to this proposed change. In reality, only 10% of their customers came from cars, and bicyclists were the second greatest spenders, second to pedestrians. Implementation of the bike lane project resulted in a triple increase in bike ridership and no slowdown in business revenue, compared to a nearby control street.

Improved bicycle infrastructure can have a positive impact on business in the US. Embracing bike lanes allows the economy to thrive. More would ride their bikes if there was good bicycle infrastructure. Bicyclists tend to be higher spenders, and there is a need for safe bike lanes, so why shouldn’t they be built? After all, bike lanes have a negligible impact on users of other modes of transportation. In the end, bike lanes could benefit everyone involved. 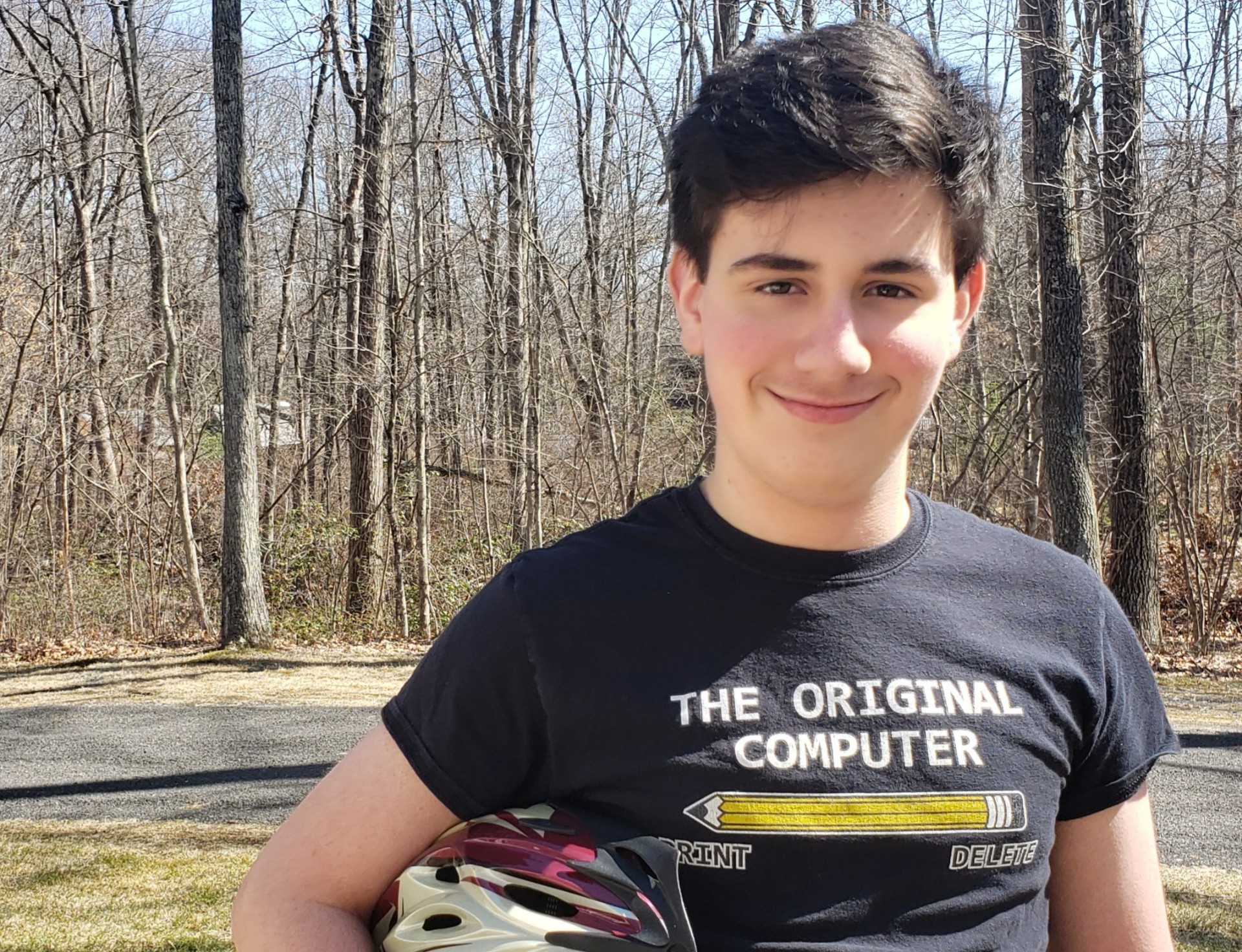 Zach is a high school student in Florence who enjoys riding his bike for entertainment and gets out as often as he can. Zach believes that bike riding should be more commonly used for general commuting and travel. He is also interested in ways to make the roads more bike-friendly.