Recently, an interesting “transportation-related”  case was decided-on in DC. A kind of case not normally seen going to the Surface Transportation Board (STB). A case that was a last gasp, Hail Mary Pass of a "Not In My Backyard" group opposed to the development of a rail-trail in Sudbury, Massachusetts. The case, though obscure, will have a great impact on the development of the longest rail-trail network in the northeast. But first, a little history...

Going back nearly 150 years, a forerunner organization, the Interstate Commerce Commission was created in 1877 to regulate railroads and rein-in some of their more onerous ways of dealing with the 3-Cs: Customers, Competitors, and Communities. Over the following century, when automobiles and trucks became more commonplace for transporting long-distance commerce, the railroads needed to be deregulated in order to level the playing field and give them greater leeway, so in 1980, the Staggers Rail Act was established to relax the rules. Overtime, the railroads needed a more responsive agency to oversee their competitiveness and STB was created in 1996 as a "statutory authority [that] resolves disputes in support of an efficient, competitive, and economically viable surface transportation network that meets the needs of its users."

Practically, the STB provides for an administrative law oversight and decisions about abandonments, disputes in operations, and rate structures between the railroads and of others details related to RRs in ways that can be so convoluted that boxcars of lawyers are needed to untangle. This is why the case of “PROTECT SUDBURY INC.—PETITION FOR DECLARATORY ORDER” is so important. 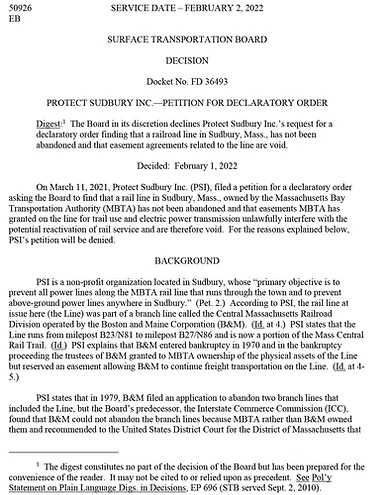 Local opponents, under the portentous name "Protect Sudbury," had claimed that the unused, surplus corridor purchased by the T in the 1970s and now more recently leased to both DCR to make an “Alternative Transportation Corridor” (ATC) and to Eversource to build a more robust grid cannot happen because the formal ‘abandonment’ of rail service didn’t take place 45+ years ago. Yet Protect Sudbury was not interested in bringing back freight rail on this corridor, and instead they were simply using an argument to the STB in their fight to prevent the development of improved utilities and a linear park.

A short 36-word statement from the STB turns down their request very succinctly:

"The Board in its discretion declines Protect Sudbury Inc.’s request for a declaratory order finding that a railroad line in Sudbury, Mass., has not been abandoned and that easement agreements related to the line are void."

On my blog, No Revisionist History, I’ve created an easy-to-understand infographic that features the 6-page decision with some call-outs that name the plain (albeit lightly lawyered) text of the decision. It becomes clear that the group’s argument for fighting the utility project and the trail is so last gasp—or Hail Mary Pass-ish—that they angered the STB. As the MA Supreme Judicial Court ruled against Project Sudbury’s arguments in 2021, supported in part by an amicus brief submitted by Atty. Andrew Fischer and MassBike.

Most importantly, a telling paragraph in the STB ruling lays out why the Protect Sudbury argument, and similar arguments made by other NIMBY groups, was a concern: “Such a legal maneuver risks abuse of the Board’s statute and processes. The Board also need not address the issue of whether the Line was abandoned.”

Thanks to the ruling by the STB, the Sudbury section of the Mass Central Rail Trail (MCRT) is now only waiting for one-more permit. A federal water quality permit from the U.S. Army Corps of Engineers regarding the renovation of a bridge over Hop Brook in Sudbury– nothing is ever easy. You can learn more about the Mass Central Rail Trail at www.masscentralrailtrail.org.

Craig is the Executive Director with Norwottuck Network, an Associate Broker with The Murphys Realtors, Trailside Team, as well as the Owner of Sugar Maple Trailside Inn in Florence, MA.

For 12 years, Craig marketed rail freight and operated New England’s largest and most successful railroad-owned, transloading facility—Railroad Distribution Services, Inc. For seven years, he worked for Rails-to-Trails Conservancy as their New England Field Representative focusing on the policy end of building rail trails as well as public outreach. Today he is a successful Realtor, the fist realtor in the US specializing in the sale of property near to rail trails.