We Need Each Other

"We need each other." 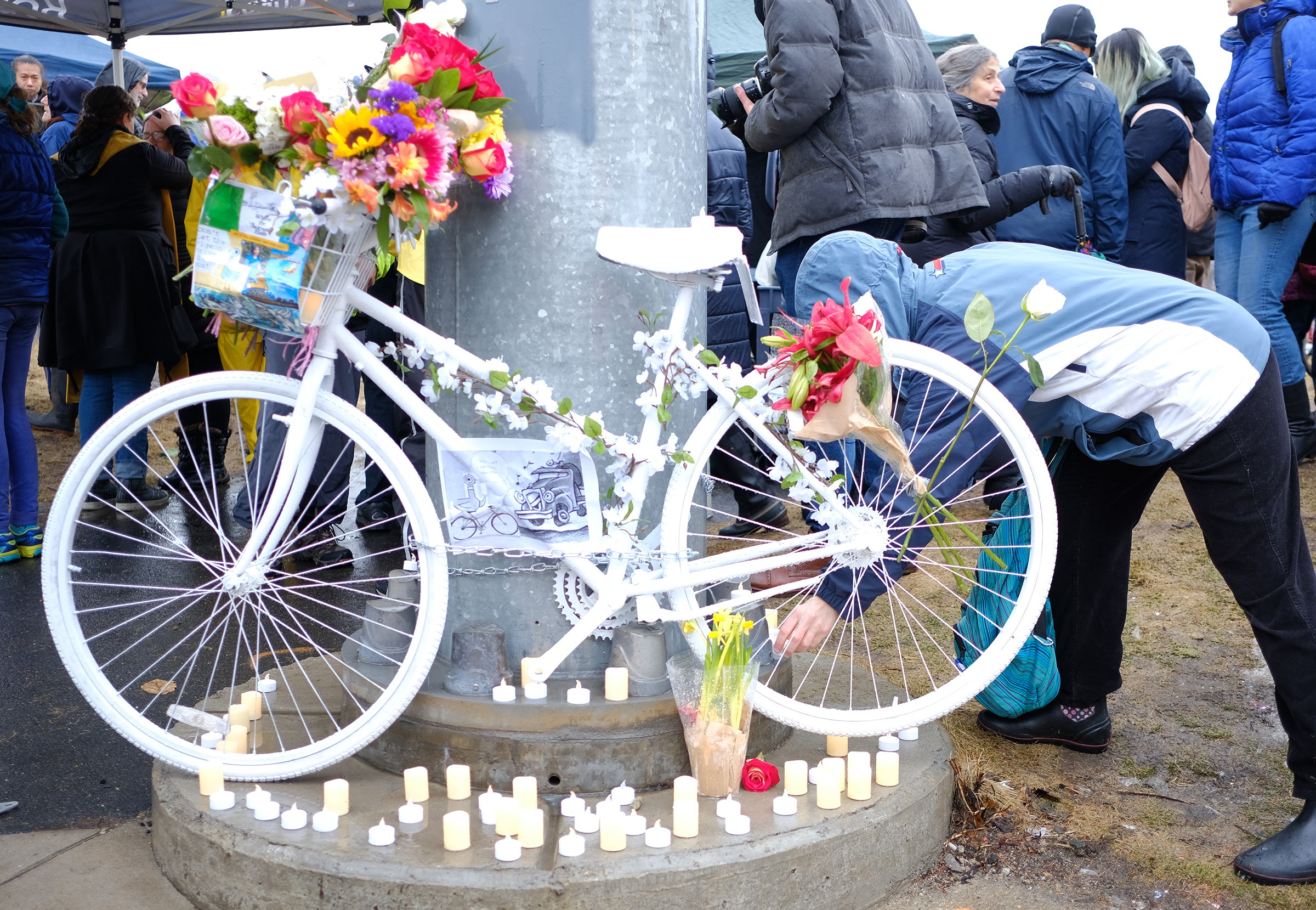 These words resounded among the more than one-hundred mourners who gathered in the cold and the rain for the Paula Sharaga Ghost Bike dedication ceremony this past Sunday.

Paula, an experienced urban cyclist, was struck and killed two weeks ago by a cement truck driver passing through an intersection in Boston.

"We need each other," we all said, collectively, after every refrain from Reverend Laura Everett during the dedication ceremony. 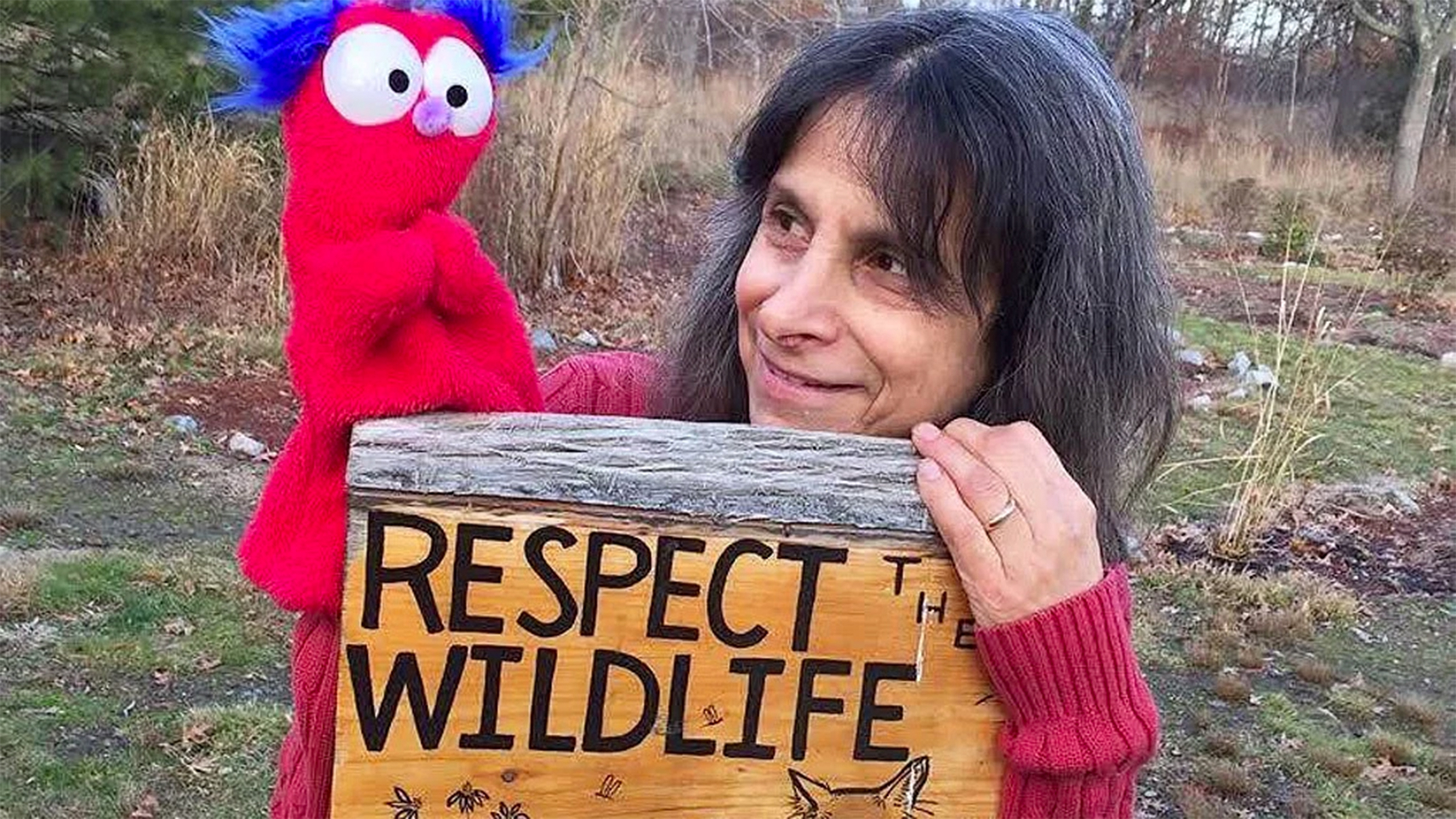 In her life, Paula was a peace and environmental activist. She marched from the Pilgrim Nuclear Power Plant to the State House to highlight the dangers of nuclear power. Paula protested the destruction of the Silver Maple forest by developers near the Alewife Brook. Paula taught children at the Brookline Public Library, sang songs with them and helped them develop as valued individuals. I learned all this from her friends, co-workers and loved ones who spoke at the ceremony, who encouraged us to honor Paula through the words of labor activist Joe Hill: "Don’t mourn, organize."

This is the power of ghost bike ceremonies: to learn of the people who lived amazing lives and touched many souls. These bikes are more than a reminder of dangers we face on the roads. They are memorials of those who shared our streets and paths and trails, who rode bikes for a better life. Lives that were taken too soon.

Installing a ghost bike at a crash site may, on its face, seem gruesome. The white paint catches your attention as you pass by. The flowers in the basket and messages pinned to the spokes evoke sentiments of longing, love, and loss. And the location of the bike, at the spot where a cyclist took their last breath, is a reminder of real danger and what we have to lose out there.

But these dedications are necessary for the cathartic healing process for the sadness and shock that we feel. For me, personally, they help me remember that we are out here every day to save lives. In my time as a bicycle advocate, I have helped make a few ghost bikes -- it is the hardest part of this role. 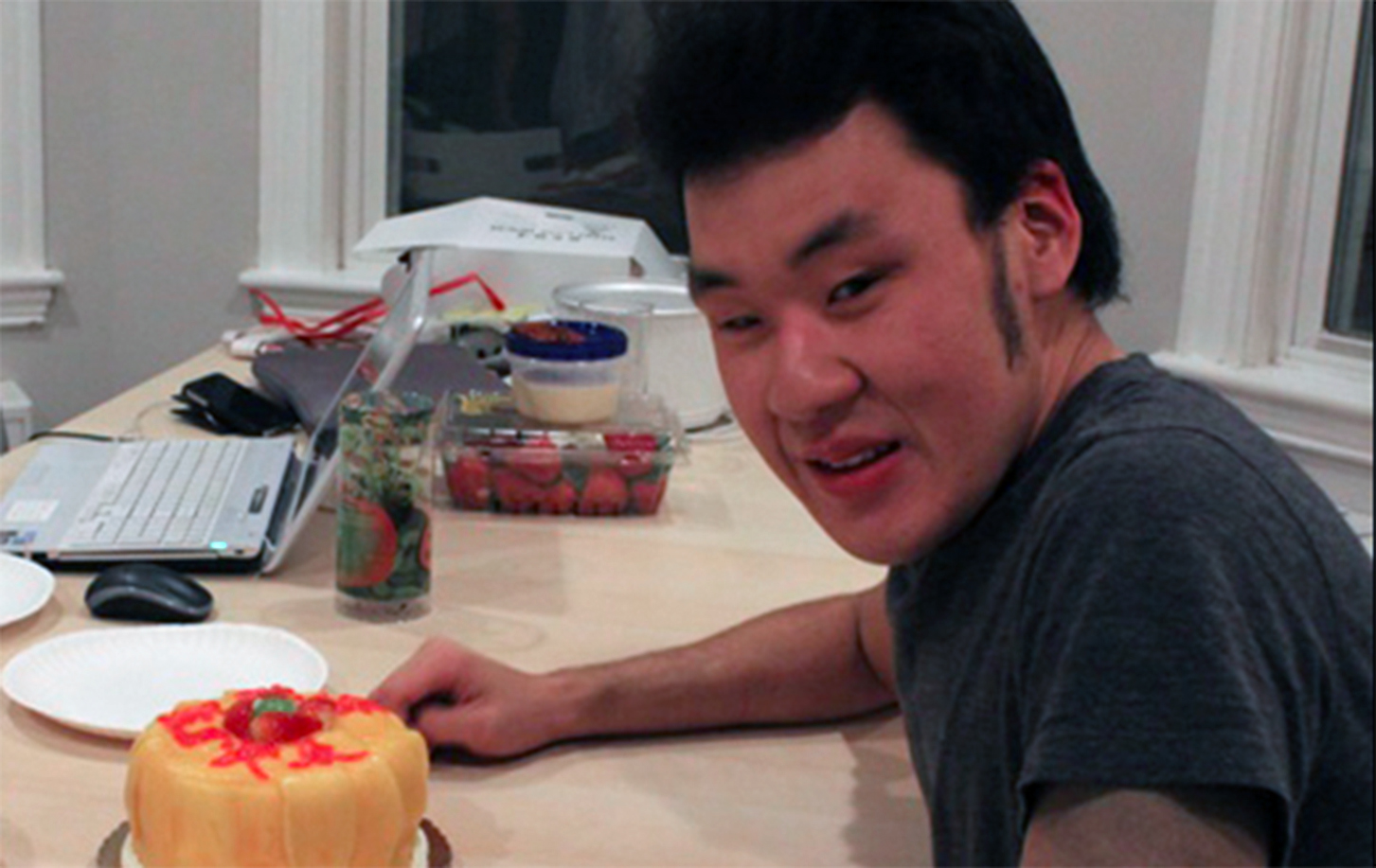 In 2012, I was walking in my neighborhood when I came across the immediate aftermath of a crash between a cyclist and an MBTA bus. Victor Yang, a Boston University student, was killed in the heart of Allston’s bustling business district. When I arrived he was being placed into the ambulance with EMTs applying chest compressions. His Red Sox hat was still in the middle of the road. Though I did not know Victor personally, I was shaken by the incident and couldn’t sleep well for days. I needed an emotional release. Later that week a few friends and I sourced a spare bike from a neighborhood co-op and painted it white. We contacted the police department, the City of Boston, and landlord of the restaurant adjacent to where Victor was killed, and told them we were installing a bike. We wrote Victor’s name on the frame and said a few words.

The white ghost bike lasted a few years until a major snowstorm forced the Department of Public Works to remove it. After the snow melted, someone, likely Victor’s friends, put up a new bike, this time it was painted purple. The purple bike lasted a few more snow storms and was eventually replaced by a tiger-striped orange bike. And the bike that’s there today is a red and yellow BMX bike with polka-dots spray painted on the seat. Walking past, you wouldn’t think this was a ghost bike, you’d think this was a funky art project -- probably more in-keeping with the type of person Victor was. 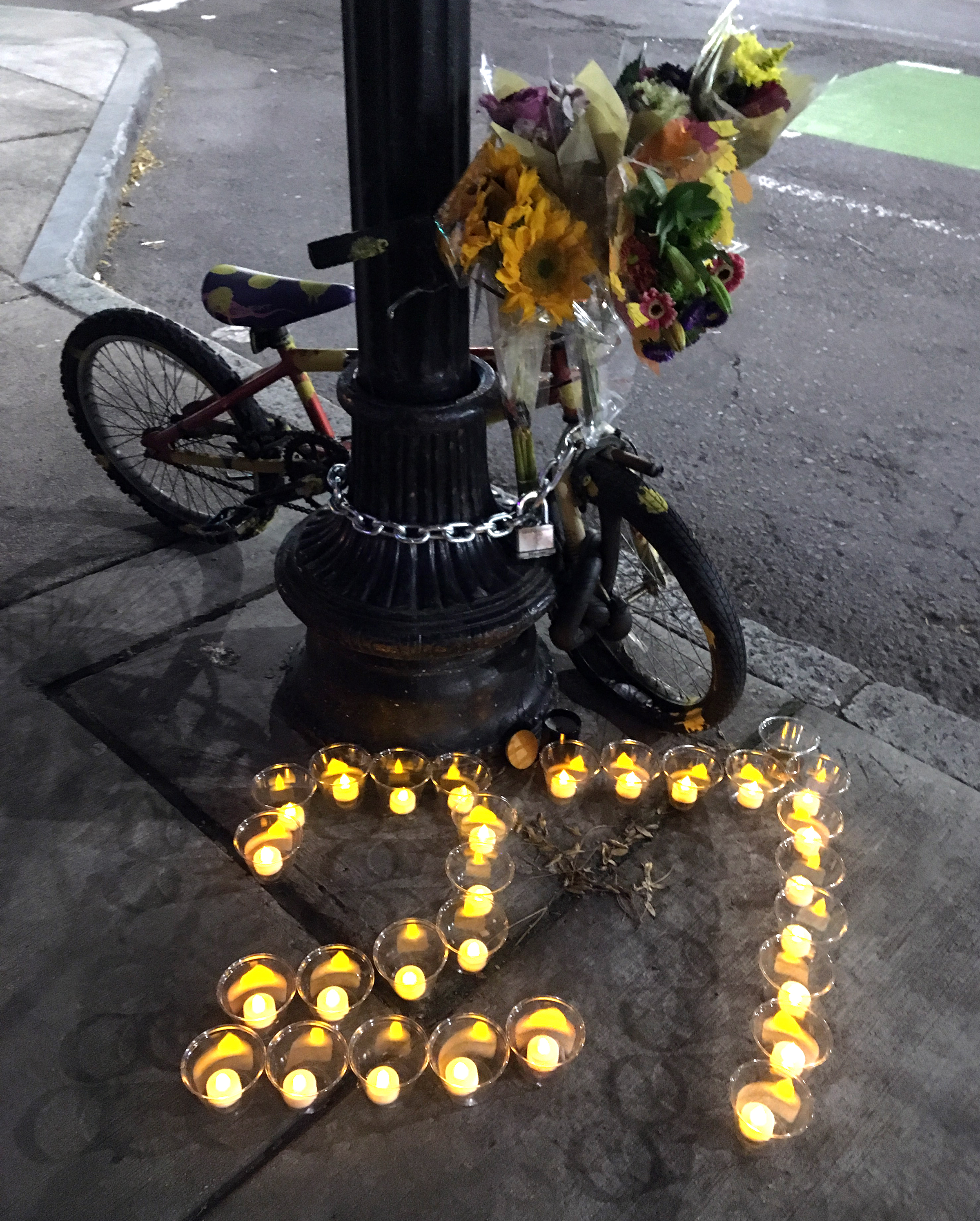 This past November, I came across the bike on the anniversary of Victor’s death and saw the memorial put out by his friends and family on what I assume would have been Victor’s 27th birthday. They had left candles at the bike, a cigar in the spokes, and wrote messages on the frame: “R.I.P Victor, we miss U.” My heart swelled and I remembered the original ghost bike, the white one put up by bike advocates to remind drivers and cyclists to be mindful and careful. That bike was gone, and instead now we have a memorial tended to by friends, family, and loved ones, all dedicated to keeping Victor’s memory alive.

In all that we do, in all that we are, we need to be reminded that we have lasting impacts on our communities. Paula’s and Victor’s and every rider’s influence will last far beyond their lives, beyond the ceremonies, beyond the advocacy that comes in response to reform how trucks and buses and bicycles maneuver our roads. And we’ll be reminded every time we pass these ghost bikes, chained to the posts at tragic locations. We’ll be reminded that we are not out here alone, and we’ll remember those who have ridden here before us.

"We need each other."