On November 15th, iconic bridges and buildings across the Commonwealth glowed yellow for the World Day of Remembrance for road traffic victims. As part of the MA Vision Zero Coalition, MassBike honored this day by remembering those we have lost in bicycle crashes this year. Usually, we gather together for World Day of Remembrance. But this year, like during much of 2020, we mourned those we have lost in bicycle crashes this year while apart. We lit candles at home and shared photos of the structures lit up yellow to honor road traffic victims. In this incredibly hard year, we are continuing to honor World Day of Remembrance throughout the month of November.

MassBike remembers those we have lost in bicycle crashes this year: George, Tommy, Charlie, Alan, Darryl, Peter, Jassiem, Gary, and Virginia. Our hearts break when we hear of every crash. We believe all traffic deaths are preventable, and we will work tirelessly until that day finally comes.

This year, we have seen the results of successful advocacy in the wake of tragedy. On Saturday, November 21, MassBike hosted a memorial ghost bike installation ceremony along a recently improved section of Commonwealth Ave. The ghost bike is a memorial to the life of Christopher Weigl, who was killed by a truck driver on December 6, 2012, as well as a symbol of the advocacy that followed in the wake of the crash. Cycling advocates collaborated with the MassDOT, City of Boston Transportation Dpt, Boston University, and several advocacy organizations, which led to the installation of a protected bicycle lane on Commonwealth Avenue. Ghost bikes usually act as warning signs for dangerous areas to cyclists, but the ghost bike memorial in honor of Christopher Weigl is a testament to what advocacy can do. The tragedy created a groundswell of advocacy which after almost eight years of work has resulted in protected infrastructure for cyclists. The infrastructure improvement project created physically separated bicycle lanes known as “cycletracks” along a stretch of Commonwealth Ave with some of the highest bike traffic and bike crash rates in the city.

The ghost bike memorial installation ceremony in honor of Christopher Weigl was a celebration of the success for cycling advocacy as well as a memorial of his life. MassBike has launched the Christopher Weigl Memorial page which provides both Christopher’s story as well as the story of successful advocacy in the wake of tragedy. After decades of being one of the most notorious corridors in the City of Boston, Comm Ave is now the standard for how we want our streets to operate for generations to come. 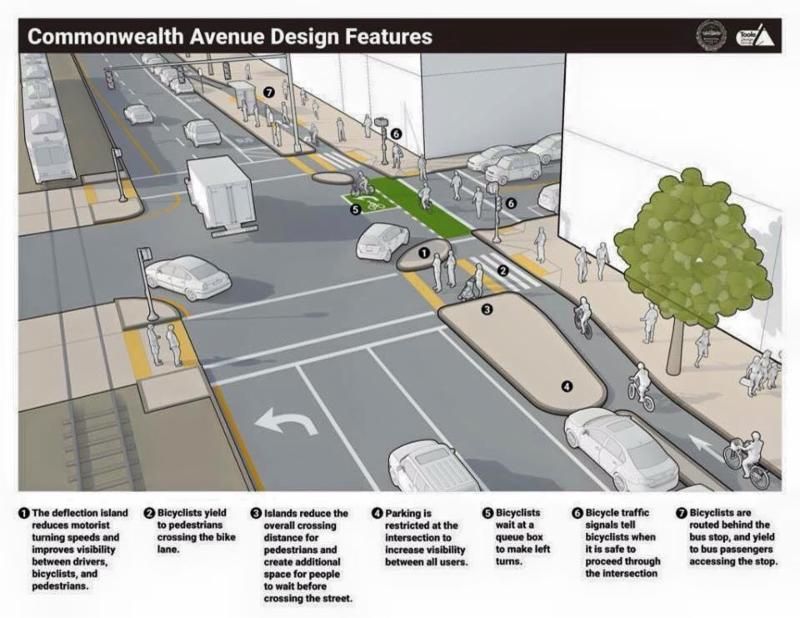 The work to reduce bicycle traffic facilities is ever ongoing, MassBike is actively supporting legislative efforts to make our streets safer for all road users. We are currently supporting An Act to reduce traffic fatalities (Bill Numbers S.2214 and H.3092). The goal is to ensure basic, but necessary traffic regulations to help everyone get where they need to go safely. The bill includes equipping state-contracted trucks with safety side guards, setting a safe passing distance of at least three feet, lowering speed limits on state roads, and more. With much work to do to achieve zero fatal crashes on our road, we will need your help. You can follow along with the progress of that bill and others we are supporting to make the Commonwealth safer for all road users at the MassBike Legislation page, and stay in touch with our work to prevent bicycle traffic deaths on the path to Vision Zero.

Have you been impacted by traffic violence? View our resources, and hear other’s stories and consider sharing your own on our World Day of Remembrance site.