Bridge Across the Ocean - A New Book by Jack B Rochester 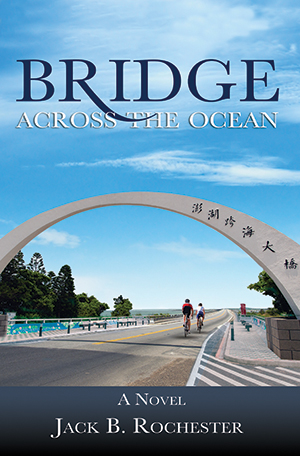 Today, we celebrate with long-time MassBike supporter, Jack, the publication of his new bicycling novel, Bridge Across the Ocean. He began writing it ten years ago, and needless to say, it’s been through a few changes since then. Here is a short synopsis:

Jedediah Smith, Luke Lin, David Bondsman and Rick Saundersson have created the most innovative bicycle drive in history: The Spinner, a technologically advanced device that produces and stores its own energy without needing batteries. It’s 2011, and it’s ideally positioned for the just-emerging city bike market, and the world’s largest bicycle maker in Taiwan is interested.

Just before they are to leave for Taipei to meet with Joyful Bike, Luke is struck down while cycling and killed by a hit-and-run driver. Although heartbroken, the three friends decide to continue with their business trip, taking Luke’s fiancée Suzie Sun with them.

At Tokyo’s Narita International Airport, the group encounters two Japanese agents of business espionage who don’t know what they have, but nevertheless want to steal it. The “information worms” pursue the cyclists to Taipei, where the stakes grow ever higher and a battle of espionage ensues.

The guys begin negotiations with Joyful’s director of business development, Jung-Shan Lai. She takes them cycling on Joyful’s newest Dragon Fire carbon fiber bikes through Taiwan’s breathtaking scenery as they continue trying to thwart the attacks of the information worms.
Jed promptly falls in love with Jung-Shan, and she with him.

Jack’s fourth novel portrays, as cyclist and author John Gantz wrote in his review, as “the span of the metaphoric bridge across the ocean (with) one end in New Hampshire and the other in Taiwan.”

Sara Dykman, author of Bicycling with Butterflies, wrote in her review, “We need stories like Bridge Across the Ocean to remind us that cycling is an act of vulnerability and an act of joy. Some readers will decide to one day bike through Taiwan. Others will daydream about breakthroughs in bike tech. Everyone will carry Luke’s story in their mind. I did all three because after all, as Joyful Bike’s CEO says, “The bicycle is my destiny.”


Join us for a Publication Party on Tuesday, September 14th at 7:30pm! You’re invited to join us for “Bikes ‘n’ Books,” our virtual publication party, where you can meet the author and Galen Mook, Executive Director of the Massachusetts Bicycle Coalition, watch a video, and enter a drawing for a free copy of Bridge. Just click on RSVP here to get the zoom information to join!

Jack first became a member of the MassBike community in the 1990s. Author of 19 books, he owns five bicycles and may soon add an e-bike to the stable. He is donating all the royalties from Bridge Across the Ocean to MassBike’s bicycle safety advocacy programs. He and his wife live beside the Minuteman Bikeway in Lexington.

To learn more about Jack & Bridge Across the Ocean, check out this fun 5 question Q&A: