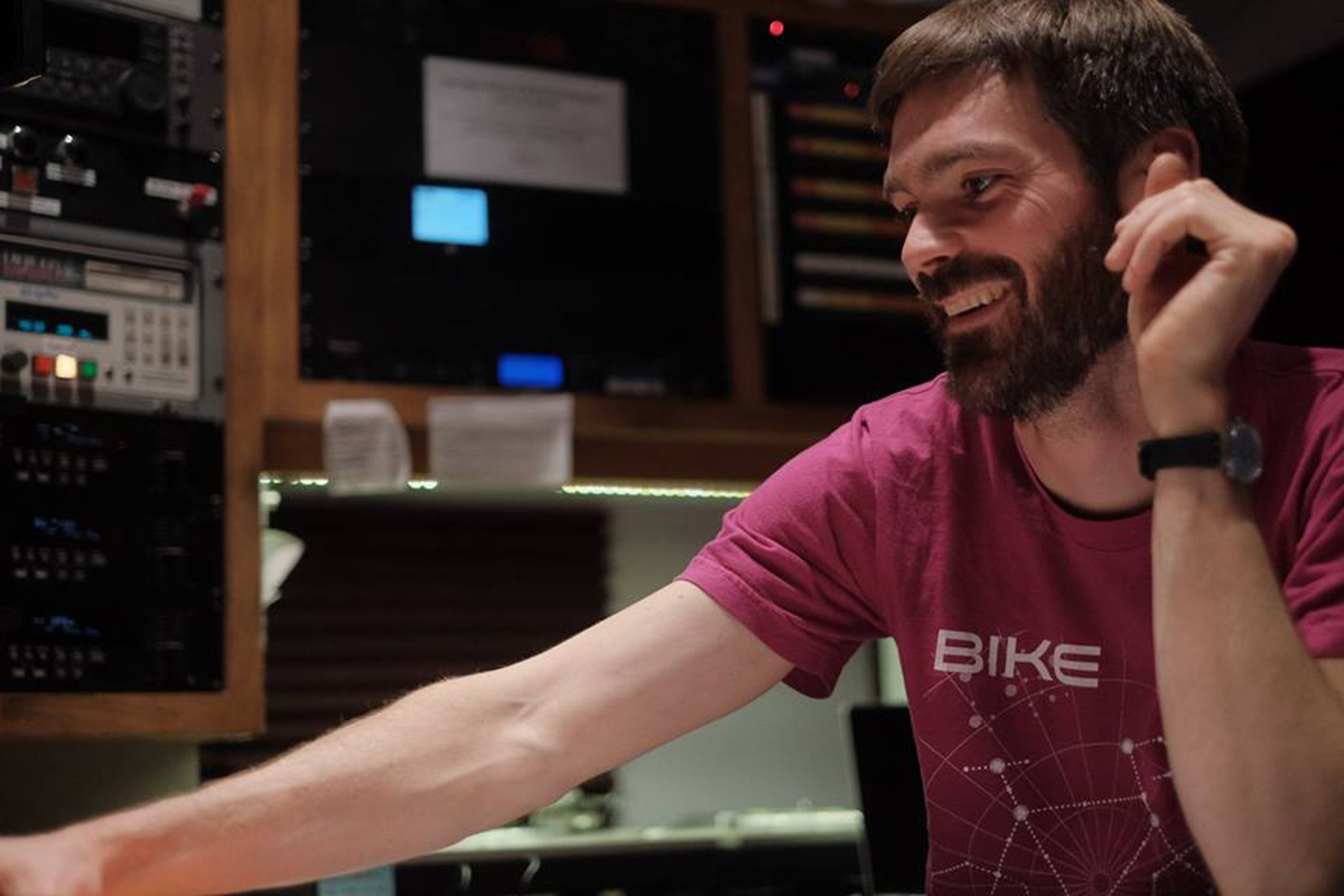 MassBike’s Board of Directors has named experienced and well respected community organizer and local activist Galen Mook as the organization’s new Executive Director. Mook will take over helm of the statewide advocacy organization in July as Massachusetts is seeing an explosion in growth of the number of people biking for fun, exercise, commuting, and competition. Cities and towns are responding to this demand by increasingly investing in safer street design and expanded multi-use paths.

As co-founder of the CommonWheels Bicycle Collective in Allston, MA, co-host of the bi-weekly radio program BikeTalk881 and co-founder of BU Bikes when he was a student at Boston University, Galen deeply understands the needs of local advocates. He also has extensive bike industry experience, working for Landry's Bicycles for the past five years. In this Q&A Galen speaks about why he’s excited to lead the organization at this critical time, his vision for MassBike’s future growth, and what biking means to him.

MassBike: Let’s kick this off by telling us a little bit about where your interest in bicycling came from?

Galen: Growing up in Reston, VA, I always used the bicycle as a means of freedom and personal transportation. Reston was one of the first new-wave planned communities of the 1960s, and Reston’s layout was crafted around communities that were linked by a network of off-street woodsy pathways, which meant from an early age I could bike myself around town, visiting family and friends – it was very empowering.

Then when I first moved to Boston to come to Boston University, I continued to use the bike to explore the city and surrounding towns, starting first with trips to the Fens and out to the harbor. I naturally fell in love with this area that first autumn when I biked out to Waltham on the Blue Heron Trail along the Charles River. So I guess my interest is in “exploring”, and exploring by bike allows me to experience New England and its communities in-depth and intimately.

MassBike: And what sustains your work in the bike community today?

Galen: The bicycle is an incredible tool to solve so many of the world’s problems (energy crisis, climate denigration, fitness, mental health, transportation, etc) particularly because it works on such a personal level. I’m sustained by the people we reach whose very lives are changed by the simple act of riding a bike. Sometimes it’s a means to get to work. Sometimes it’s combating a health issue. Sometimes it’s raising money for a charity. And more often than not it’s for the simple joy of getting out on two wheels. We all need more joy in this world, and that’s exactly where the bike fits best!

MassBike: So why join MassBike now? What excited you about leading the organization at this moment?

Galen: I’m excited about the momentum we have made in bicycle advocacy since that new wave of advocacy began taking hold about a decade ago. I was part of campaign to put the first bike lane in the City of Boston (a 1-mile stretch from the BU Bridge to Kenmore Square) in 2008, and what progress we’ve made since then! Each year, bicycling is becoming normalized and respected as a valued mode of transportation, and we’re growing our ridership in diverse ways. Bicycling used to be a niche sport, now it’s no longer even seen as a “sport” in many contexts – it’s just what people do. And as we grow these contexts, I see us growing our ridership in every corner of the Commonwealth. I’m excited about being a part of this cultural movement.

MassBike: How are some ways you envision ensuring MassBike meets its mission of statewide advocacy and empowering advocates at the local level? 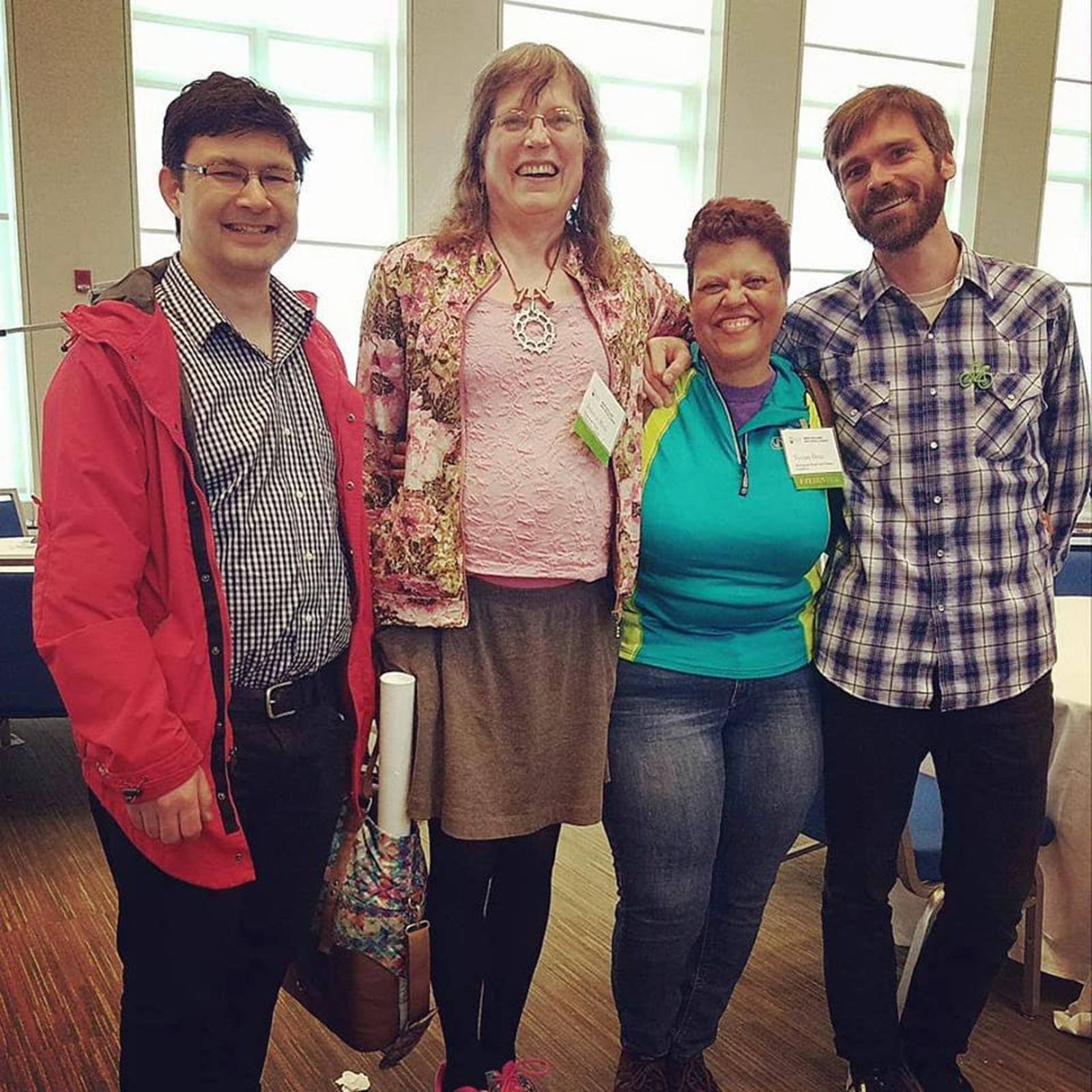 Galen: We have many resources, skills, and talents at MassBike, but we’re just one organization and we don’t have it all. However, by utilizing the resources, skills, and talents that exist in residents, organizations, and community leaders throughout the state, our impact can be exponential. I envision MassBike getting to its core of being a “coalition,” which can manifest in the work done in our chapters, and the work being done by our legislators and their constituents, and also by partnering with mission-driven organizations already out there in the field doing great work. At the MassBike office we do have certain skills to share, and it is our duty to share these, so specifically I will work to forge relationships with our chapters and partners in all corners of Massachusetts. But more so we’ll continue to listen to others’ wisdom and expertise to make sure we’re as effective as possible in our collaborative work.

MassBike: Related, you’ve also mentioned that it will be important to continue to strengthen the MassBike community, building our sense as a collective. What are some ways you’ll see to do that?

Galen: We can build on the foundation that’s already been laid by prior Executive Directors, specifically thinking of the hugely successful Advocacy Boot Camp where we essentially held a skill-sharing day for advocates and officials from around the state to share best practices. I’d like to expand this skill-sharing concept and bring these Boot Camps out into every corner of the Commonwealth by connecting with MassBike chapters. We need to not only bring in experts to share advocacy skills, like a magnet, but also to explode out and get these skills into the communities where there are folks already in action, like a supernova. I’d also like to reignite the Lobby Day, which was held in the past with the other statewide advocacy organization Walk Boston. Lobby Day was a great way for constituents from all across the state to forge relationships with legislators and their staffers, and to hear about the concerns that are in all the nooks/crannies throughout the commonwealth. 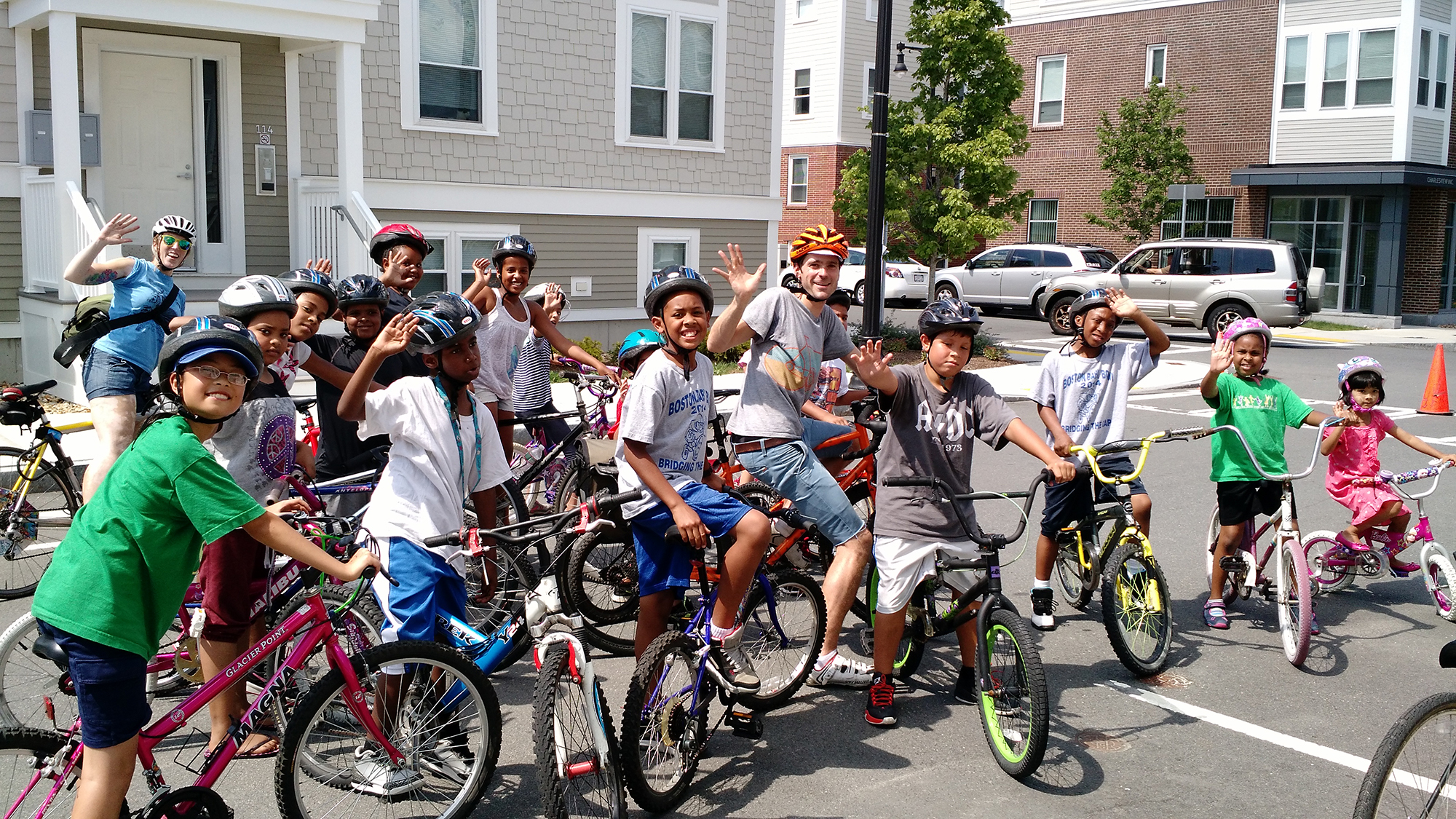 MassBike: Among the many, many ways you’ve been actively involved in bicycling is as a cycling instructor. What has that taught you about the role education has in MassBike’s mission?

Galen: I absolutely love my role as a cycling instructor. And since I’ve worked with all ages, and all varieties of riding (from learn-to-riders to paceliners to daily commuters) I’ve trained myself to listen to the needs of each specific rider and then internalize their barriers to try to find solutions. I’m a believer that anybody can ride a bike (or trike, or recumbent, or tandem, or ebike, etc), but there are so many barriers that still exist preventing folks from getting out on the road and trails. By being in a classroom setting, I’ve positioned myself as a person who is responsible for solving these problems, which has taught me to think well outside my own two-wheels and gain empathy for the nuances of every rider.

MassBike: How about BikeTalk, the bi-weekly radio program you hosted with Gamal Smith -- what was the goal of starting that program?

Galen: Ah, the radio show is great fun! I must give credit to WMBR in Cambridge for giving me the microphone to share cycling to a radio audience. The power of having a radio show is that it takes bicycle advocacy and puts it in a new media. Sometimes we talk about a bike lane campaign, or sometimes we have guests on to talk about the bike industry, or sometimes we just riff on our #BikeJoy for an hour. But the main goal is reaching a broader audience than just cyclists. At the end of our last show, we had a caller to the station who just wanted to say he appreciated hearing about the changing and progressing cycling culture, and as a former cyclist he appreciated that the Times They Are a’Changin’ for the better – it was very sweet.

MassBike: You’ve got deep experience in community advocacy but also with the bike industry where you’ve worked for the last five years. Talk a little bit about the role the bike industry can play in fostering a biking in Massachusetts?

Galen: The bike industry is hard work! And I have much respect for the folks trying to make it in today’s economy, which is changing as fast as new apps are released.

The bicycling movement would be nowhere without bike shops, manufacturers, and distributors keeping everyone out on two-wheels. I view bike shops as community spaces, and they turn into clubs and resources for riders of all types. Bike shops are also part of the bike infrastructure, and every new bike shop is like getting a new protected bike lane or pathway – it just brings out more riders and normalizes cycling. However, many shops are closing up, due to a variety of factors including the aging out of shop owners from the 1980s and 90s now looking to retire. And every shop lost is like grinding out a bike lane…

The advocacy community and the bike industry go hand-in-hand. Advocates are looking to get more riders out in the world, which means more riders needing new bikes and replacement parts and upgrades and bike fittings and clinics and classes, which are all provided by shops and the industry. The better we do as advocates to improve ridership, the better the shops will do providing the actual resources to the riders. I view MassBike as selling “bicycling”, while the shops are there to sell bicycles.

MassBike: The current state of bike advocacy does not come close to representing the true diversity and range of people who bike in Massachusetts and elsewhere. How can we begin to make the biking conversation more equitable and listen better to voices of people that have traditionally been left out or ignored?

Galen: All people of all ages and all races and all genders and all backgrounds and all economic classes ride bicycles, and it’s the duty of bicycle advocates to represent as diverse a constituency as possible. Yet in order to represent people, MassBike needs to understand who they are, where they come from, their concerns and issues and successes – and make these issues everyone’s issues. And in order to understand who these riders are, MassBike must create a space, a platform, an arena for people to have a voice and contribute to the conversation.

We must also acknowledge that, as advocates, we are not yet doing that effectively enough. So, to answer your question, we can begin to make the conversation about equity by: first, actively using our resources to create these spaces and seeking out the voices that are not currently represented, be it for racial, economic, gender, or age reasons; and second, by listening to and actually hearing folks who know their own communities best. This is not easy, and the institutions of our society do not lend themselves toward equity, diversity, or inclusion. So we must work every day in all our efforts to keep “equity” in our consciousness and as a primary driver of our actions. 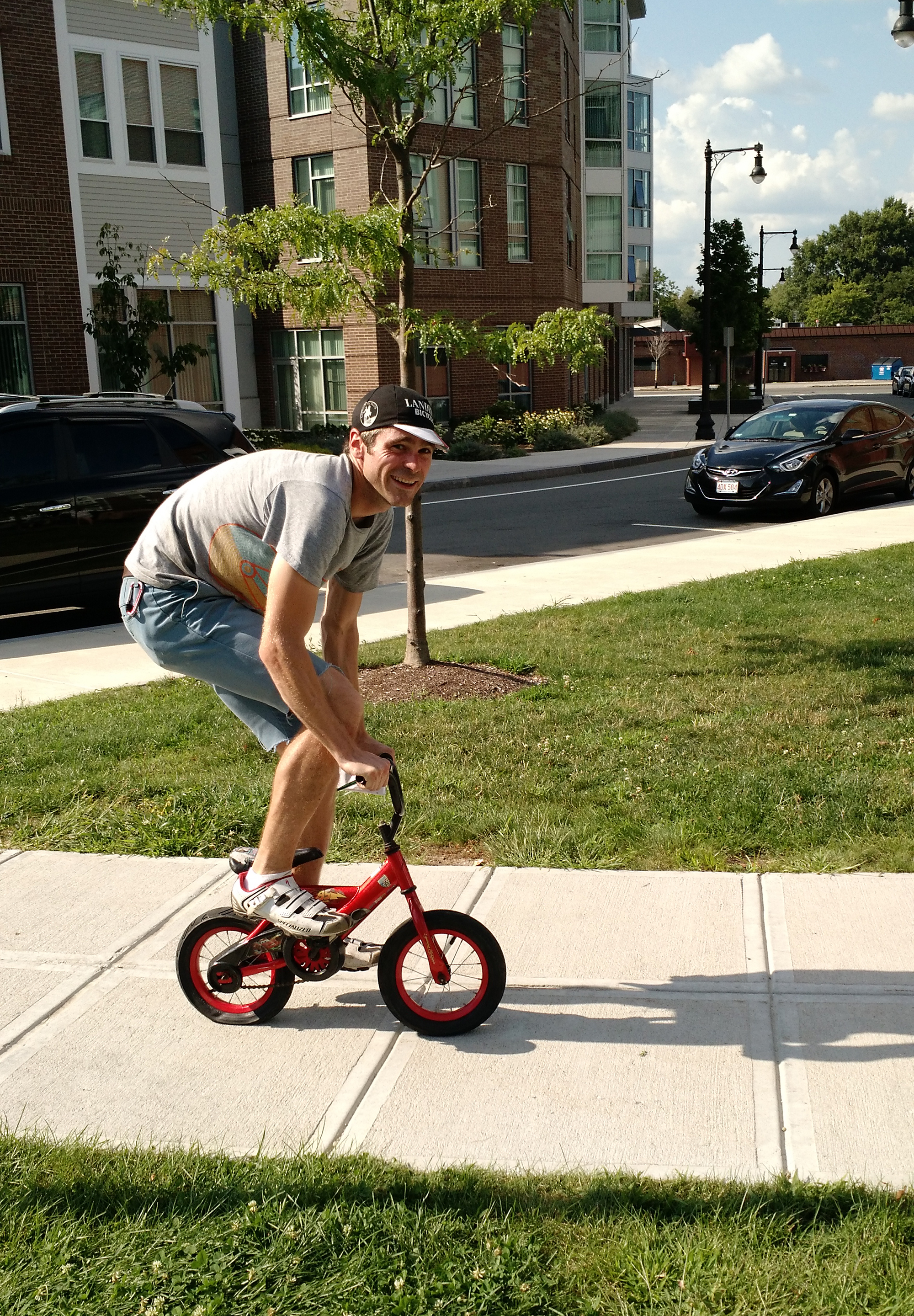 MassBike: You’ve mentioned MassBike needs to make sure it is maintaining the fun in bicycling. What do you mean by that?

Galen: Much can and should be credited to the “cage-rattling” advocacy that calls out the powers-that-be for failing to accommodate safe and accessible cycling. And though that may lead to better policies and infrastructure, it doesn’t necessarily lead in the goal of getting more butts on bikes. Bicycling is inherently fun, and it’s for everyone, and we need to keep reminding people these facts. I see the clearest way to get to safer cycling is to get more cyclists out on there in the world, and we’re best served by reminding folks of the joy of cycling.