This is the fourth installment of the Riding the Border to Boston (B2B) Trail series, Read Part III Here

Our final ride was 7.6 miles, the exact same distance as the Mount Washington Auto Road Bicycle Hillclimb (which Bode remembers all too well because he suffered through it the month before our Border to Boston journey). This was much easier. The ride from Everett to Long Wharf took us about 1 hour and 15 minutes, although it was just 54 minutes of ride time. When we got dropped off, the weather changed, and we were a little skeptical about the rain, but we decided to go for it. The route was mainly paved bike paths that were next to roads. Most of them had flex posts separating the cyclists from the traffic, so we felt very comfortable, more comfortable than riding through some parts of Peabody and Salem.

Under the bridge next to the Malden River, hiding from the rain.

Starting out in Everett, we got onto a bike path that crossed under a bridge. The path had stone walls that were almost like berms and were fun to ride up and down. We stayed there a while to see if the rain would stop. Then we crossed through Gateway Park where there was a staircase to ride. We then rode adjacent to the Malden River for a while, which was nice, and by the Encore Casino which was impressive and had a really nice path with pretty landscaping. 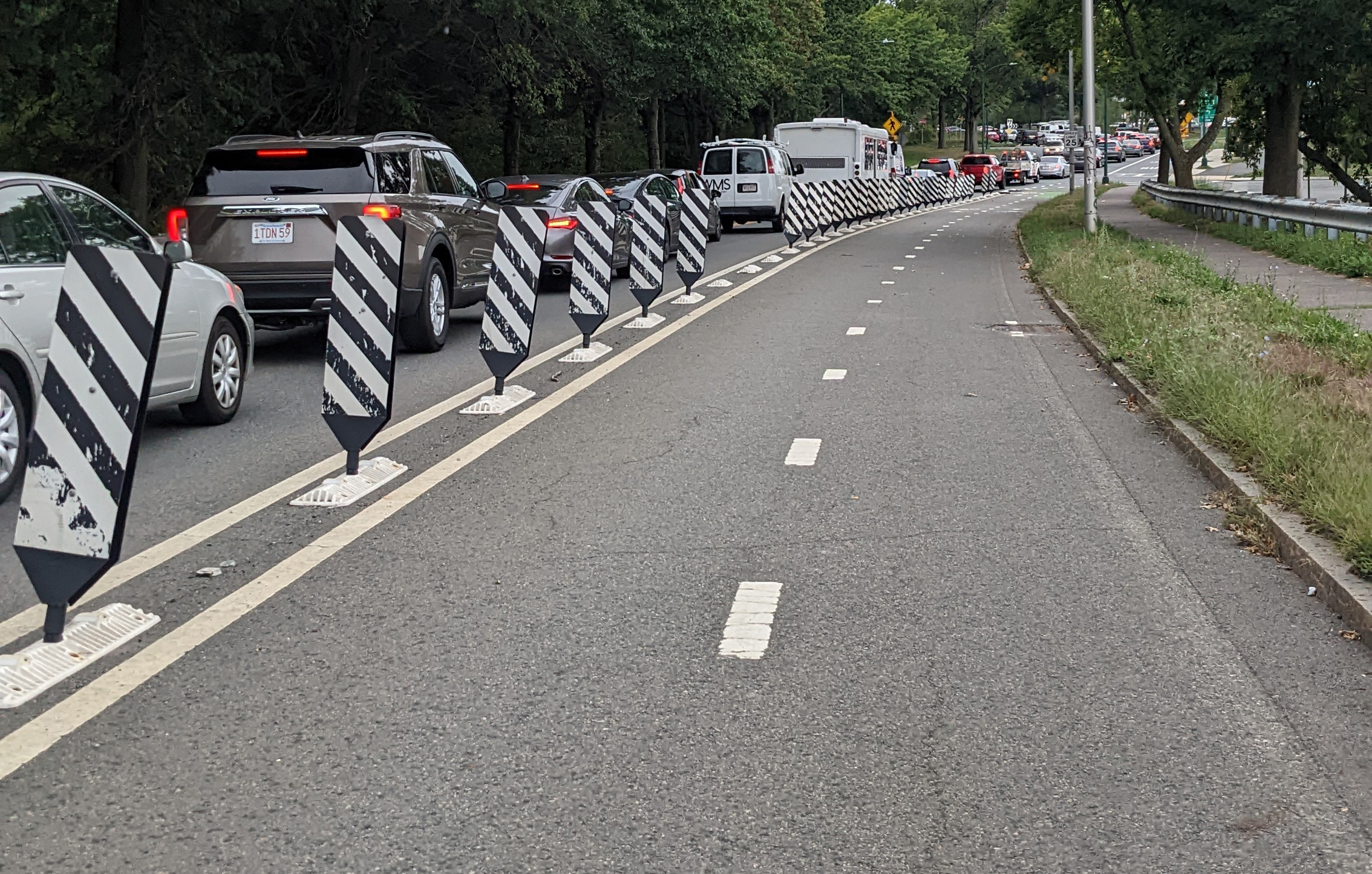 This entire part of the road is for bikes only!

After the casino, we rode across the Mystic River on Alford Street then over to Medford Street, through Charlestown. Medford Street was pretty quiet, maybe because it was a Sunday. On Medford Street, we found another huge staircase for Aidan to ride. After Medford Street, the route winds through some quiet roads and eventually brings you to Paul Revere Park which had some nice staircases and drops that we sessioned. After that, there was an interesting walkway across the Charles River where everyone was walking their bikes. It was super slippery because of the rain. That brought us into Boston. From there we took a bike path that went right along the water, then transitioned to a bike lane along the side of the road to our finish at Long Wharf.

View from the bike path into Boston

Riding the complete Border to Boston Trail was a unique experience for us and we definitely plan to do it again. It will be especially nice when the section between Newburyport and Topsfield has been connected so we cannot wait for that to happen. It has been interesting to learn about all the effort that goes into creating these types of trails and we now better appreciate what it means when we hear that a large grant was approved to help complete different sections. We know exactly where those sections are and experienced first hand why there is a need to improve them. We cannot wait until it is all complete and there is a safe 70 mile route from the New Hampshire border through the North Shore and into Boston for cyclists, walkers, and joggers. There are so many fun things to see along the way that it is a great place for everyone to spend more time outside.

We were able to go full speed to our pick-up spot on Long Wharf thanks to this great bike lane.